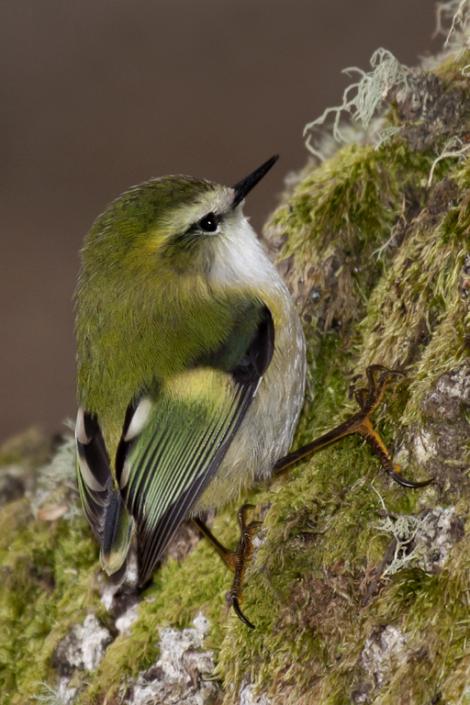 The rifleman is generally considered to be New Zealand’s smallest bird (the equally light-weight grey warbler has a longer tail). It is one of only two surviving species within the ancient endemic New Zealand wren family. Riflemen are small forest-dwelling insectivores, and are constantly on the move, producing a characteristic ‘wing-flicking’ while moving through the canopy and foraging up and down tree trunks. South Island riflemen are found throughout forests of the main divide, but are less common in the east of the South Island, and scarce on Stewart Island (apart from Codfish and Ulva Islands). The North Island rifleman survives as geographically isolated populations on North Island mountain ranges, with only three populations north of Kaimai Forest Park (Warawara Forest in Northland, and on Little Barrier and Tiritiri Matangi Islands).

Riflemen are sexually dimorphic. Males are smaller than females and have bright green on the head and back. Females are mainly yellow-brown with darker speckles on the head and back. Both sexes have pale grey under-parts. The black bill is slender, pointed, and angled slightly upwards. Riflemen are very small birds with short wings and a very short tail and forage predominantly within the canopy and on tree-trunks.

Similar species: rock wren (South Island alpine areas only) is larger, with longer legs and a stouter bill that is not upturned.

Riflemen are found predominantly in mature forest, especially beech, kauri, kamahi and podocarp forest. They are now mainly confined to higher altitude forest throughout both the North and South Islands. Their distribution in the North Island is patchy, including throughout the eastern ranges south to the Rimutaka range and on the Central Plateau (including Pureora Forest Park and Tongariro National Park). Remnant populations are present in Warawara Forest (Northland), on Little Barrier Island and in Mount Egmont National Park. Riflemen are widespread throughout the west of the South Island, and also occur on Banks Peninsula and in the seaward Kaikoura ranges. They are scarce on Stewart Island, but common on Codfish Island. Riflemen have been translocated to Ulva Island, Dancing Star Preserve (Stewart Island), Cape Kidnappers, Tiritiri Matangi Island, and to A'Deane's Bush, Hawke's Bay.

Riflemen occur at high densities throughout the eastern and southern ranges of the North Island (e.g. Urewera, Kaweka and Tararua ranges), and at lower densities in other remnant populations around the North Island. They are locally common in Nelson and in Marlborough and relatively widespread through the west of the South Island but in lower numbers in the east of the South Island.

Population declines and fragmentation of riflemen are considered likely to be related to habitat clearance initially, compounded by the impacts of introduced pest species, particularly stoats.

Riflemen breed from August through to February. They build enclosed spherical nests within existing cavities. A diverse range of cavity types are used for nesting. Pairs can raise up to two broods per season, with more attempted if any nests fail. The male does most of the nest building, and both sexes contribute to incubation, nestling and fledgling care. Incubation of the 2-5 eggs takes about 20 days, and chicks leave the nest when about 24 days old. Riflemen breed in cooperative family groups in both sub-species, where related offspring of both sexes help to raise siblings from subsequent clutches. Helpers contribute to feeding of nestlings but not to incubation or nest-building. Help provided by related individuals results in increased juvenile recruitment at helped nests. Unrelated helpers may also assist with breeding and are thought to gain pairing opportunities from helping.

Riflemen are relatively poor flyers with limited dispersal capability. They typically move through the forest using short flights, mainly from canopy to canopy. The majority of time is spent foraging for small insects in the canopy or on tree trunks; in the absence of introduced predators, riflemen also forage on the ground. They use a variety of foraging behaviours including probing beneath bark on the trunks of trees, gleaning from leaves and branches, and are infrequently seen to aerial forage. Riflemen are a monogamous species with long-term pair-bonds, only replacing a mate if one of the pair dies. Mates forage in close proximity throughout the year, keeping in contact using frequent calls. Breeding appears to be initiated by male nest-building behaviour. Males contribute substantially to the parental effort including nuptial feeding, nest building, and a share of incubation, and nestling and fledgling care. Riflemen live in kin neighbourhoods and are often seen in cooperative groups which raise broods together. Loose territories are occupied but are rarely aggressively defended. Territory boundaries appear to be loosely defined with no vocal or behavioural advertisement of boundaries, and neighbour intrusions largely tolerated.

Riflemen are exclusively insectivorous, feeding on a large variety of small invertebrates, particularly beetles, spiders and moth species (both adults and caterpillars).

Lill, A. 1991. Behavioural energetics of overwintering in the rifleman Acanthisitta chloris. Australian Journal of Zoology 39: 643-654.

A very small forest bird with short wings, a very short tail, pale grey under-parts and a slender pointed black bill angled slightly upwards. Males are smaller than females with green on the head and back; females are mainly yellow-brown with darker speckles on the head and back.

South Island rifleman pair with chicks in nest in powerbox