Geographical variation: Five subspecies. The form most likely to occur in New Zealand is the nominate race regina from eastern Australia. Other subspecies occur further north and west through northern Australia and Indonesia. 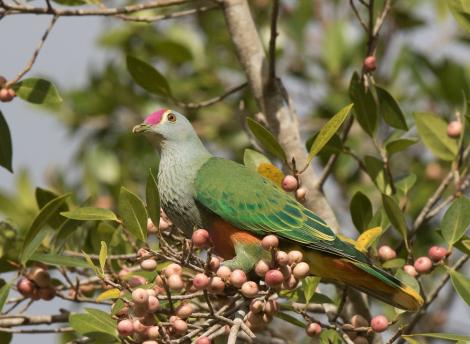 The rose-crowned fruit dove is a tiny, brightly-coloured pigeon from rain forests of northern and eastern Australia, that is most likely to be found in the canopy of a tree or shrub with ripe fruit. There is a single record from New Zealand.

A small, stocky, mainly green dove with a short tail. Adults are brightly coloured, particularly on the crown and belly. Adult males have a grey head and breast, with a streaked texture on the breast. The forehead and crown are pink, bordered at the rear by a thin yellow stripe, and with a whitish patch separating the pink crown from the eye. The grey breast is sharply separated from the yellow-orange underparts, with a deep pink central patch just below the demarcation line. The back and upperwings are bright green, with darker primaries. Scapulars and inner flight feathers have dark centres and pale fringes. Green extends onto the flanks and down the thighs, separating the yellow-orange belly and undertail. Underwing grey. Tail green with a yellow tip. Eye brown, beak and legs grey. Females are duller, particularly on the belly. Juveniles are predominantly green (including head and breast), with a diagnostic pale line in front of the eye, pale yellow underparts, and prominent pale fringes to upper wing coverts creating a scaly appearance.

Voice: a series of 4-5 deep, slow, vibrant coos, followed by ten or more increasingly rapid notes. Loud for its size, but difficult to locate.

Similar species: No other fruit-dove species have been recorded from New Zealand. The most likely confusion species (superb fruit-dove) has a similar distribution in Australia, though is less common in New South Wales. Adults differ from rose-crowned fruit-doves in several plumage features, including having a black breast band, russet nape, and purple crown. Juvenile superb fruit-doves are similar to juvenile rose-crowned fruit-doves, but do not have a pale mark in front of the eye, and have a white (not yellow) belly.

Rainforests of the coastal fringe of eastern and northern Australia, and Lesser Sunda Islands and Maluku Islands of Indonesia. The nominate subspecies occurs from Cape York (northern Queensland) to central New South Wales, and is vagrant to Victoria and Tasmania.

The only New Zealand record was a juvenile that landed on a vessel anchored about 75 km off the south Taranaki coast in August 2019. It was captured alive and taken to the mainland, where it was put down by Biosecurity New Zealand due to biosecurity concerns.

Laying from at least August to February. A single egg (30 x 21 mm) is laid in flimsy nest at least 2 m above the ground (and up to 30 m). Both sexes incubate, for 16–18 days. The chick fledges at about 12 days old, when only a third of adult size, but reaches adult size after another 10-12 days. Both sexes feed the young, including for at least 2 weeks after fledging.

Although brightly coloured, fruit-doves can be very cryptic among dense canopy foliage. A seasonal migrant in the southern part of its range, where it is more numerous in summer. Usually solitary or in small groups. Most active (including calling) during cooler parts of day. Heard more often than seen.

Almost entirely fruit, plucked from the canopy and swallowed whole. Black or purple fruits are preferred, with typical consumption rate of 2 per minute.

A very small, stocky pigeon with mainly green upperparts. Adults are brightly coloured, with green upperparts, grey head and breast, a pink crown, pink and orange belly, and a yellow tip to the green tail. Juveniles are predominantly green, apart from a pale line in front of the eye and pale yellow patches on the belly and undertail.