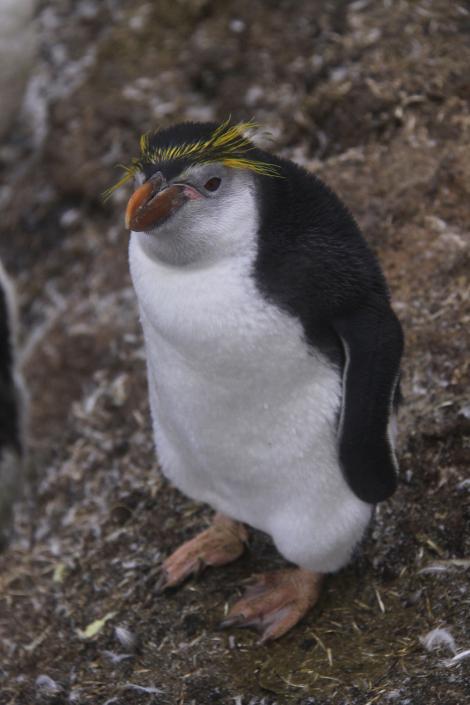 Royal penguins are the largest of the crested penguins, and are endemic to Macquarie Island, an Australian-administered subantarctic island south-west of New Zealand. They are easily recognised by their white faces, massive orange bills, and scruffy orange-yellow crests that meet on the forehead. Royal penguins are rare vagrants to New Zealand, but have occurred as far north as Napier. The dark-faced nominate subspecies (macaroni penguin) is a very rare vagrant to New Zealand. It was given its name by 19th century sailors after members of the ‘Macaroni Club’, a pejorative term for young men with outlandish tastes or fashion sense.

Royal penguins are large crested penguins, approaching the size of yellow-eyed or gentoo penguins. They differ from all other crested penguins in that most birds have white faces (sometimes pale grey or dark gray). The dark-faced 'macaroni' subspecies shares their enormous orange bill, prominent pink skin at the bill base, and scruffy orange-yellow crests that meet on the forehead. This last character is contra all other crested penguins, which have two separate crests that do not meet on the forehead. The remaining upperparts are blue-black, and the underparts silky white. Immature birds have a less robust, darker bill and reduced crest, but always have some chrome yellow feathers on the forehead. The eye is red-brown, and the legs and feet pink with black soles.

Voice: like other crested penguins, very noisy at colonies. The main call is a deep, throbbing bray or trumpeting. The contact call is a short bark.

Similar species: chinstrap penguin is the only other white-faced penguin, but has no crest. The erect-crested penguin is almost as large as the (dark-faced) macaroni penguin, and also has a black face and long, robust orange bill, but has paired crests that do not meet on the forehead.

Like most penguins, royal penguins only come to land when required to breed or moult. They breed at Macquarie Island only, and are rarely recorded on land away from there. Colonies on Macquarie Island are situated on the coast and on slopes up to 200 m. Macaroni penguins breed abundantly on islands situated close to the Antarctic convergence (Polar Front) in the Atlantic and Indian Ocean sectors of the Southern Ocean. South Atlantic breeding sites include South Georgia, and South Sandwich and South Orkney Islands, with populations in the Falkland Islands and southern Chile also. In the Indian Ocean sector macaroni penguins breed on Crozet, Kerguelen, Marion, Prince Edward, Heard and McDonald Islands. There are no populations in the Pacific sector, where the macaroni penguin is replaced by the conspecific royal penguin, and further north by the erect-crested penguin (the next largest crested penguin).

Being confined to a single breeding site, royal penguins are vulnerable to single-site catastrophes such as oil-spills. The population is considered stable at about 850,000 pairs in 57 colonies.

Royal penguins breed only on Macquarie Island in large colonies. They arrive in September and lay in October-November. Like all crested penguins, they lay two eggs of markedly different size, with a second larger egg laid about 4 days after the first. As with the two other large crested penguins (macaroni and erect-crested penguins), the egg size dimorphism is extreme, and almost all the small first eggs are lost early in incubation. Only in about 1% of nests does the first egg produce a chick. The five smaller species of crested penguins have less difference in the size of the two eggs, and generally hatch both eggs, with the chick from the smaller egg usually dying of starvation within 10 days. Incubation by royal penguins is shared and takes about 35 days. Both adults feed the chick, with most chicks fledging in late January, when about 65 days old.

Like most penguins, royal penguins spend most of their lives at sea, coming ashore only to breed and moult. Both during breeding and feeding they are highly social. During the breeding season, foraging trips extend out to 415 km for females and 650 km for males, with durations varying from about 19 days during incubation, down to 5-6 days during chick-rearing. After chicks fledge, adults go to sea for about 36 days, after which they return to their breeding site to moult during February-March, which takes about 4 weeks. Once back at sea after the moult they travel vast distances, up to 10,000 km. The main predators of royal penguins are leopard seals, fur seals and sometimes orcas. Predation rates in the colonies are relatively low, with some unguarded chicks and eggs taken by subantarctic skuas (eggs and chicks), southern black backed gulls (eggs only) and giant petrels (chicks only).

The macaroni penguin is also a social nester, congregating in very large breeding colonies. Territories are established by males in late October just before females arrive. Courtship is intense with the birds displaying mutual head movements, vocalisation and preening. Usually two eggs are laid but the smaller first egg is rejected when the larger second egg is laid. The majority of the care of the chick at the nest is done by the male. The chicks fledge in February to early March, then the adults moult in April-May, after which birds return to sea until October.

The diet of the macaroni penguin consists of krill, fish and squid. During breeding, the female does most of the foraging until the end of the guard stage, provisioning the chick approximately every two days. Both adults feed the chick for the last 6-7 weeks before it goes to sea. Outside the breeding season, macaroni penguins range over long distances foraging for food. They have been recorded diving up to 100 metres depth, but most dives are much shallower. Royal penguins feed predominantly on Antarctic krill (Euphausia superba), which make up about 90% of the diet during the breeding season. At other times, fish can make up to 30% of the diet.

Hull, C.L. 1999a. Comparison of the diets of breeding royal (Eudyptes schlegeli) and rockhopper (Eudyptes chrysocome) penguins on Macquarie island over three years. Journal of Zoology 247: 507-529.

A tall, portly black-and-white crested penguin with an enormous orange bill with prominent pink skin at the base, and foppish orange-yellow crests that meet on the forehead. The upperparts are blue-black and the underparts silky white.