Geographical variation: The rare and little-known MacGillivray’s prion (macgillivrayi) from St Paul Island in the southern Indian Ocean may be a subspecies of Salvin’s prion, or of broad-billed prion, or a full species. 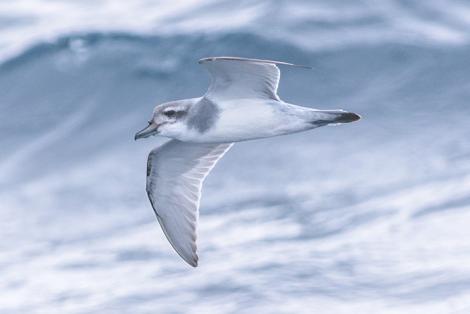 Salvin’s prion is an abundant small seabird of the southern Indian Ocean, breeding in vast colonies on the Crozet and Prince Edward Islands. They are very similar in appearance to the five other prion species: blue-grey and black above, and white below, with blue-grey bill and blue legs. Salvin’s prions do not breed in the New Zealand region, but are often found storm-wrecked on beaches in late winter, especially on the west coast of the North Island.

Similar species: Salvin’s prion is most similar in bill structure to the Antarctic prion, and the two also have very similar facial markings. The main characters used to distinguish them in the hand are that Salvin’s prion generally has a slightly larger, darker bill (13.5-17.5 mm wide) with a smaller nail at the tip, outwardly-bowed sides to the bill when viewed from above, and lamellae (comb-like filters) that are visible from the side when the bill is closed. In contrast, the Antarctic prion has a slightly smaller (11-15.5 mm wide), bluer bill with relatively larger nail, straight sides to the bill when viewed from above, and the lamellae are not visible when the bill is closed. The broad-billed prion has a more massive bill (18.7-24.3 mm wide) that is darker than that of other prions (lead-grey, shading to blue at the widest margins, and with a blue lower mandible).

Salvin’s prions breed in vast colonies on Prince Edward and Marion Islands and especially the Crozet Islands in the southern Indian Ocean. They nest in short (0.9-1.5 m long) burrows under tussock. At sea, Salvin’s prions mainly occur close the Antarctic Convergence, near their breeding islands. In winter their range extends west to South Africa and east to New Zealand, where they often wash ashore on the west coast of the North Island, and occasionally on Chatham Island. Large numbers of birds are cast ashore in June-July some years, e.g. 1307 in 1970, 5228 in 1974, and many thousands in 2012.

There are few claimed sightings of Salvin’s prions off the New Zealand mainland, but this is partly due to the extreme difficulty of separating prion species at sea.

Most breeding islands are now free of introduced predators, but feral cats are present on Ile aux Cochons, and ship rats limit breeding success on Ile de la Possession (both in the Crozet Islands). Feral cats (since eradicated) killed many thousands of Salvin’s prion on Marion Island between 1949 and 1991.

Salvin’s prions occur in large flocks near their breeding islands, often mixed with other prion species. They are generally not attracted to boats, but will fly alongside large vessels. They visit breeding sites after dark and depart before dawn, or stay in burrows or nest crevices during daylight. Large numbers are killed by subantarctic skuas. Many birds disperse eastward outside the breeding season, and are often found storm-wrecked on the south coast of Australia and the west coast of New Zealand.

Salvin’s prions mainly eat small pelagic crustaceans, along with small fish and squid. Food items are mainly captured by shallow dives or surface-seizing while hydroplaning – facing into the wind with wings extended, and dipping the head and neck into the upper 10 cm of the water column.

A large-medium prion, blue-grey above and white below, with a blackish ‘M’ across the back from wingtip to wingtip, a black tip to the upper tail, blue-grey bill, and blue legs and feet. In the hand, the bill is relatively large and dark with outwardly-bowed sides when viewed from above, and lamellae (comb-like filters) that are visible from the side when the bill is closed.