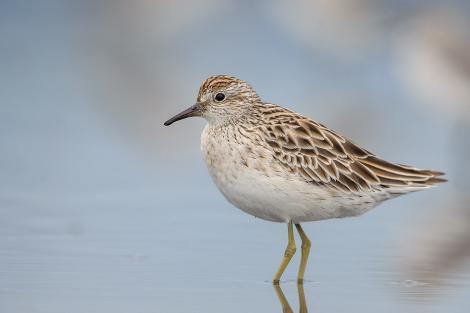 The Calidris sandpipers are a bewildering group of small to medium-sized waders, many of which are very similar to each other. Almost all are long-distance migrants, and so are capable of crossing the vast expanses of ocean required to get to New Zealand. Four members of the genus visit New Zealand often enough to be considered regular migrants, but another 12 species have been identified in New Zealand on at least one occasion. The sharp-tailed sandpiper is one of the regulars, along with lesser knot, red-necked stint and curlew sandpiper. Until the 1990s, up to 200 sharp-tailed sandpipers visited New Zealand each summer, and could be found in flocks of 5-10 birds at favoured estuaries and wetlands scattered throughout the country. Their numbers have since plummeted, and perhaps as few as 30 birds are now reaching New Zealand each year. Because New Zealand is on the edge of the sharp-tailed sandpiper range, it is unclear whether the large decline in the number of birds arriving here mirrors overall population trends, or whether it reflects a change in migration patterns, with a lower proportion of birds crossing the Tasman Sea.

Both the common name and the scientific name (acuminata) refer to the individually sharply-pointed tail feathers, a feature only apparent if the bird is in the hand.

The sharp-tailed sandpiper is a smallish, speckled brown and white wader with straight, shortish dark bill and reddish cap to its head. It is midway in size between a lesser knot and a red-necked stint, being similar in size to a banded dotterel, but slimmer and more elegant. A prominent white eyebrow extends well back above the eye, and a narrow white eye-ring is apparent in good views. The feathers on the back and wings are rich brown or chestnut with pale borders, though can be much greyer than this. Brownish speckles on the breast feathers merge into the pale belly in a diffuse border (cf. a sharp border in the similar pectoral sandpiper). Breeding plumage is similar, but with prominent dark chevrons on the otherwise pale flanks. The bill is dark, grading into pale brown at the base of the lower mandible; the legs are yellowish. Males are 15% larger than females. Juveniles are more brightly coloured, with the rufous cap, lores and ear coverts strongly contrasting with the white eyebrow, an orange-buff wash to the breast, and with back feathers fringed with bright chestnut, white and buff. The steady gait of sharp-tailed sandpipers, pecking and probing, is quite different to the run-stop-peck action of small plovers such as banded dotterel.

Sharp-tailed sandpipers breed in northern Siberia, from the delta of the Lena River east to east of the Kolyma River delta. Over 90% of the population migrates to Australasia in the non-breeding season, with the remainder mainly in Melanesia and Polynesia. The mudflats of the Yellow Sea (China and South Korea) are important staging areas during migration.

Sharp-tailed sandpipers occur in New Zealand between September and April, with a very few staying over winter. They are found mainly at the coast in tidal harbours and the shallow margins of lowland lakes, in areas of short, sparse vegetation. They have also been seen inland in braided rivers in Canterbury. Sharp-tailed sandpipers are often seen in areas frequented by wrybills and banded dotterel, but they generally associate with others of their kind.

About 160,000 sharp-tailed sandpipers are estimated to occur in the East Asian-Australasian Flyway, with c.91% migrating to Australia in the non-breeding season. The number visiting New Zealand each year was about 100-200 birds up until the 1990s, but has since declined markedly. Between 1985 and 1989 an average of 18 was seen at Lake Ellesmere each year; this dropped to an average of only 12 between 2006 and 2009. During this latter time period, fewer than 25 sharp-tailed sandpipers were recorded from the whole country each year.

The number of sharp-tailed sandpipers reaching New Zealand is likely to be adversely affected by reclamation and pollution of essential staging habitat in the Yellow Sea (between China and the Korean Peninsula), required by the birds on migration in both directions.

Sharp-tailed sandpipers breed in coastal tundra of northern Siberia. They are polygynous, with males performing elaborate aerial courtship displays and mating with multiple females, which care for the eggs and chicks alone. The clutch of 4 eggs is laid in a well-hidden ground nest, with chicks leaving the nest soon after they hatch.

In autumn [April] sharp-tailed sandpipers begin to attain breeding plumage in New Zealand and become more animated and courtship behaviour can be observed before migration.

A small speckled brown-and-white wader with a straight shortish dark bill, reddish cap, narrow white eye-rings and yellowish legs. A prominent white eyebrow extends well back above the eye, the feathers on the back and wings are rich brown or chestnut with pale borders, and brownish speckles on the breast feathers merge into the pale belly in a diffuse border.