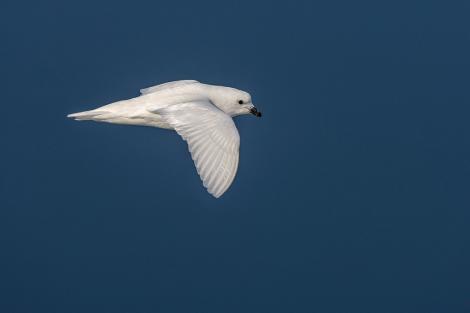 It is the smallest of the seven fulmarine petrel species, the other six being southern and northern giant petrels, Antarctic and northern fulmar, Antarctic petrel and Cape petrel. It is the only petrel species with pure white plumage, providing it with good camouflage in Antarctica. In contrast, it has a short, narrow, hooked blue-black bill, dark brown eyes and blue-black feet. It has relatively long wings and a wedge-shaped tail.

Along with South Polar skua, the snow petrel has the southernmost breeding range of any bird species, and is one of only three species recorded at the South Pole. It is a circumpolar breeder in Antarctica, nesting up to 440 km inland in the Antarctic mountains, and up to 2,400 m above sea level. It also breeds on glaciated islands, including the Balleny Islands and Scott Islands in the Ross Dependency, and South Georgia, South Orkney and the South Sandwich Islands, and Bouvetøya Island, in the South Atlantic Ocean. Its life-cycle is closely linked to pack ice: drifting sea ice that becomes packed together in large masses. Birds occur mainly in areas of sea with 10-50% ice cover, are rarely recorded at sea north of 55°S, and have never been recorded around the New Zealand mainland.

The snow petrel is a small fulmarine petrel with pure white plumage, a short narrow hooked blue-black bill, dark eyes and bluish-black feet. It has relatively long wings (75-95 cm), and a wedge-shaped tail when fanned in flight. The sexes are alike, with the male usually slightly larger; juveniles are distinguished by extensive black barring on upperparts. Snow petrels are agile fliers, flying low when over water, using more rapid wing-beats and less gliding than other petrels. Pronounced differences in size are reported between individuals, with the largest adult birds around one quarter larger than the smallest.

Voice: adults cluck, screech and chirr. They have harsh gutteral calls, including a high pitched kir-kir-kir, and make plaintive calls during mating. Chicks chirrup when parents arrive at the nest.

Similar species: the only other all-white bird in Antarctica is the snowy sheathbill (absent from the Ross Sea sector), which is distinguished by its bulkier body, larger head and yellow bill, and land-based life-cycle. Antarctic and Arctic terns in Antarctic seas are distinguished by black caps and red bills. White morph southern giant petrels are at least 8 x the size of the largest snow petrels (by weight), with huge pale yellowish-horn bills, and always have a few scattered black feathers.

Snow petrels are confined to Antarctica and neighbouring glaciated islands, including the Balleny Islands and Scott Islands in the Ross Dependency, and South Georgia, South Orkney and the South Sandwich Islands, and Bouvetøya Island, in the South Atlantic Ocean. In October 1994, two birds were recorded as vagrants at sea 180 nautical miles south-west of Australian-administered Macquarie Island. In 1994 and 1995, two dead birds were recovered on Macquarie Island, which lies 650-700 km south-west of Auckland and Campbell Islands in the New Zealand subantarctic region.

The snow petrel has a circumpolar distribution in Antarctic waters, from the edge of the pack-ice to the continental ice-shelf. Occasionally birds flock in open water where icebergs are present, where they are often seen roosting on icebergs. During the austral winter they disperse to pack ice, ice floes and open seas, when seas nearest breeding sites are frozen. Birds recorded at South Georgia are always near drifting ice offshore or at the heads of glaciers.

There is an estimated total global population of 4 million adult snow petrels.

One of the most abundant bird species of the Antarctic region, the IUCN Red List classifies the snow petrel as Least Concern. Climate change may threaten the species in future because Antarctic birds seem to be breeding later in response to a reduction in the extent of sea ice cover, causing decreases in prey species in some areas, or the increasing length of the sea ice season, which delays access to breeding grounds.

The snow petrel is a circumpolar, loosely colonial annual breeder south of the Antarctic Convergence, on glaciated islands and continental Antarctica. Colonies in the Theron Mountains are up to 440 km inland from the coast, and at altitudes up to 2,400 m above sea level. It nests where rock is exposed during summer, under overhangs, or in crevices and small caves. Birds perform aerial displays year-round. Courtship involves head-raising, bill-fencing, bill "kissing", and mutual preening. Some birds stay at colonies year-round, with the main influx mid-September to early November. Snow petrels are monogamous with long-lasting pair bonds, and shared incubation and chick care. A single white egg (56 x 40 mm) is laid between late November and mid-December. Nests are pebble-lined scrapes on snow-free rock ledges with overhanging protection or in deep rock crevices. Incubation takes 41-49 days, with eggs hatching in January. Chicks fledge between late February and mid-May, 41-45 days after hatching.

Snow petrels are loosely gregarious at sea and when breeding. Flocks show no coordinated flying movements; individuals have agile, erratic, bat-like flight. Snow petrels nesting south of the Antarctic Circle experience continuous daylight in the middle of their breeding cycle; even then, they concentrate their activity at the breeding colonies when the sun is lowest in the sky. Snow petrels are not truly colonial because nests are often sparsely scattered among large concentrations in suitable habitat. Nests are often associated with those of other fulmarine petrels (Antarctic fulmar, Antarctic petrel, Cape petrel), which compete for the same limited ice-free space. The snow petrel is more of a crevice nester than the three larger ledge-nesting species. At the nest, an occupying bird may squirt foul-smelling orange stomach oils at intruders (other snow petrels, skuas or humans) via the open mouth, and fight off other snow petrels using its bill and wings. Birds stained with oil from such fighting gather on snow banks near nesting sites to clean their feathers in snow. Snow petrels may live up to 20 years.

Snow petrels feeds mainly on krill, squid and fish, and scavenge carrion such as bird, seal and whale carcasses. Food is taken by aerial and contact dipping, surface-diving, surface-seizing and pursuit diving, and sometimes pursuit plunging with open wings. While surface-seizing, birds sometimes peck the sea surface continuously while rotating their bodies with their webbed feet, like a phalarope. Feeding birds sometimes accompany minke whales and Antarctic petrels.