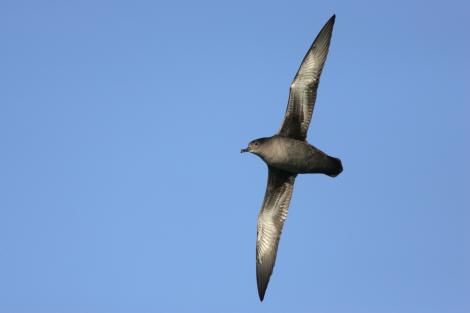 Sooty shearwaters are the common dark seabird of coastal New Zealand, south of Banks Peninsula. They may occur in spectacular flocks of tens of thousands, particularly around the southern South Island and Stewart Island, when they congregate on bait balls of crustaceans and feed by flying into the water from a shallow angle. Also known as muttonbirds, the young are harvested at traditional sites around Stewart Island by descendants of Rakiura Maori. 'Muttonbirders' can access the islands from 15 March to prepare for the harvest, which starts on 1 April and can continue until 31 May. During the first half of the season, chicks are extracted from their burrows during the daytime. Once the chicks start emerging at night in preparation for their departure (mainly in May), they are captured in large numbers on the surface, with the daily take limited by the time it takes to pluck and process the birds the following day. The total harvest from the Stewart Island region is estimated to be around 400,000 chicks per annum.

The sooty shearwater is a large, dark shearwater with long, narrow wings, long slender bill and narrow short tail. The upperparts are sooty brown whilst the underparts are slightly greyer with a silver-grey flash on the outer area of the underwings. The feet are dark grey, and barely project beyond the tail in flight.

Similar species: sooty shearwaters may be confused with several other species of shearwaters and petrels. The most similar is the short-tailed shearwater which is similarly-coloured but slightly smaller, with a relatively smaller head and bill. It typically has dull grey underwings, darker than sooty shearwater, and the feet usually extend beyond the tail when the bird is in flight. The wedge-tailed shearwater is slightly smaller, has a long slender wedge-shaped tail, and has dark plumage overall with no pale plumage under the wings. The flesh-footed shearwater is also slightly smaller by weight, and dark overall, but has a paler bill and noticeably pale legs and feet that do not extend beyond the tip of the tail when in flight. The grey-faced petrel has a different shape (larger headed, shorter necked, longer wings) and has a chunky black bill and a variable pale face, contrasting with remaining dark grey plumage.

The sooty shearwater is one of the most widely distributed seabirds in the world. In addition to breeding in New Zealand, it also breeds on islands off Australia, Chile and the Falklands. During the breeding season (September-May) it occurs throughout coastal New Zealand waters, making trips of about 2000 km each way to forage in the vicinity of the Polar Front at about 65°S, especially when gathering food for its young. After breeding, birds from New Zealand migrate to the North Pacific Ocean where each bird stops over in one of three discrete regions off Japan, Alaska or California before returning to New Zealand for the following breeding season.

Sooty shearwaters breed on numerous islands around New Zealand, from the Three Kings in the north and south to islands around Stewart Island, as well as The Snares, Auckland, Campbell, Antipodes and Chatham Islands. A few small colonies persist on headlands of mainland South Island. All the large colonies are around Stewart Island or on The Snares. There are no accurate estimates of the total New Zealand population, but based on recent detailed work on the large populations on The Snares and islands off Stewart Island it was estimated that the population was about 21 million birds.

Introduced mammals, particularly feral cats, rats, mustelids, feral pigs and dogs have extirpated most mainland sooty shearwater breeding colonies. Large breeding populations are now restricted to predator-free offshore islands. The sooty shearwater is one of the seabird species most frequently observed killed in the New Zealand fisheries during 1996-2004, with demersal longliners and trawling operations responsible for the majority of mortalities. Sooty shearwaters migrate to the North Pacific Ocean, where they may be at greater risk from pollutants and gill net fisheries.

Sooty shearwaters breed in large, dense colonies. They are monogamous with shared incubation and chick care. The nest is lined with leaf litter and is in a chamber at the end of a burrow. However, the burrow system is complex and varies with locality so that several pairs may share a common entrance or there may be several entrances to one burrow system. Birds tend to return to the same area from year to year, but may not use the same burrow in successive years. A single large (77 x 4 mm)  white egg is laid from late November to mid-December. Incubation takes 53-56 days; chicks fledge at about 86-106 days and are independent at fledging (late April to early June).

At sea, sooty shearwaters may occur in large flocks to feed on concentrations of crustaceans or small fish. They often dive to obtain food, using their half-opened wings and webbed feet for propulsion. In areas of dense concentrations of prey they may form extensive rafts on the sea after they have fed.

During the breeding season they congregate offshore from their breeding colonies during the early evening and generally start coming ashore after sunset and throughout the early part of the night. When landing they tend to crash through the vegetation and land near their burrow. During the early part of the breeding season colonies are very busy and noisy with birds cleaning out burrows and others courting. Their departure from the colonies begins about two hours before dawn and is equally noisy, with unemployed birds emerging from burrows and moving through the colony to some well-defined cliff top or well-placed tree from which they can launch off and return to the sea. Sooty shearwaters are annual breeders that usually return to the area year after year, often with the same partner. After breeding the colonies are deserted and the birds migrate to the North Pacific Ocean. Banding shows that about 92% of breeders survive from one year to the next, and so oldest birds would live for over 20 years.

Sooty shearwater eat fish, squid, krill, and offal from fishing vessels taken from the surface and by diving. Birds frequently plunge or dive for food to depths averaging 16 m, and have been recorded swimming to depths of over 60 m.

A large dark shearwater with long narrow wings, long slender black bill, narrow short tail, and dark grey legs and feet that barely project beyond the tail in flight. The upperparts are sooty brown while the underparts are slightly greyer with a silver-grey flash on the outer area of the underwings.

Calls on ground in light rain followed by calls in burrow

Calls at colony, mostly by birds on the ground

Calls on ground while mating