Geographical variation: Two subspecies: P. g. whenuahouensis breeding only on Whenua Hou / Codfish Island, and the more widespread nominate subspecies, which has bred at least once at the Auckland Islands. 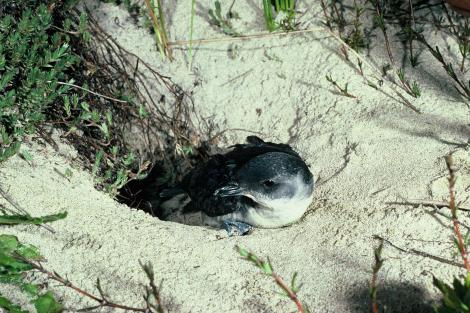 Diving petrels are small seabirds with a short neck, wings and tail, and a stubby bill. They are superbly adapted for diving for prey and have dense plumage to insulate their small bodies. The South Georgian diving petrel generally breeds on high open scree fields above the vegetation line on cold subantarctic islands. However, the New Zealand subspecies nests at sea level in sand dunes near the subtropical convergence. This major difference in habitat preference has led some biologists to consider the New Zealand birds to be a different species. Diving petrels as a group feed on small plankton (copepods, krill) and juvenile fish. The only remaining New Zealand population of South Georgian diving petrels occurs in the sand dunes at Sealers Bay, Whenua Hou / Codfish Island, where they are referred to as Whenua Hou diving petrels.

The Whenua Hou diving petrel is a small black-and-white petrel (tube-nosed seabird) with very short rounded wings and a short tail which are designed more for diving activities than flight. Birds have a dark capped head but with grey feathering behind the eyes which extends up like ear-muffs. The entire upper surface is black including the upper wings. The feathers of the rump have white bases. The tail is distinctively forked in some individuals in the New Zealand population. The undersides including underwings are white. In the hand, the short bill (13-16 mm long) is black with pale blue edges. The legs and feet are mostly blue with some black margins.

Voice: the calls are plaintive mewings, distinctive from those of close relatives. Male and female calls are separable in the field.

Similar species: common diving petrels are very similar in size and structure but have duskier grey-white underwings and all dark feathers on the rump. The tail is always square tipped. The sides of the head behind the eyes are darkish. The bill has small differences in shape to those of South Georgian and Whenua Hou diving petrels. The plumage differences are quite subtle, and Whenua Hou diving petrels are very unlikely to be separable from common diving petrels at sea. The white-tipped feathers along the base of the wing and dark line on the tarsus edge (often reported as diagnostic) occur in juveniles of both species.

The sole remaining breeding ground in New Zealand is on Whenua Hou / Codfish Island, near Stewart Island. The species formerly nested on Enderby and Dundas Islands at the Auckland Islands, with a bird from Dundas Island genotyped as being of the nominate subspecies suggesting the possibility that Enderby Island birds were of this subspecies also. Subfossil bones indicate that the species previously nested on Stewart Island and possibly on Chatham and Macquarie Islands, although the subspecies at each site is unknown. Elsewhere, South Georgian diving petrels nest on subantarctic Heard, Kerguelen, Crozet, and South Georgia Islands. On Codfish Island the birds nest in sand dunes behind Sealers Bay. Some nests are at the base of dunes at the back of the beach whereas others are amongst native or introduced coastal dune vegetation on the dune slopes. All nests are within 100 m of the sea. Nest sites are in very unstable sand and it is nearly impossible to access the nests without destroying these sites. The at-sea range of the species in the New Zealand region is unknown. Elsewhere they feed in cold water near convergence zones and on the edge of the continental shelf. They are very competent divers and spend much of the day underwater.

Whenua Hou diving petrels are highly threatened. In 2003, a single storm event eroded a large amount of the dune habitat and many birds perished as the dunes collapsed. The dunes are also shrinking as coastal forest habitat expands from the landward side of the dunes. Introduced exotic grasses and herbs are also spreading on the dunes and their roots choke the burrows of the petrels. Some native rushes also create a similar problem. High quality native dune habitat is still present but is likely to diminish over time without active management. Human disturbance and burrow trampling is a threat and access to the dune areas is restricted. There are no current at-sea threats for this species, however, a local oil spill would be a disaster. Common diving petrels were one of the major victims of the Rena oil spill in the Bay of Plenty in 2011. Conservation measures to date have included locating and marking active burrows, catching and marking birds to determine population size, and weed control. Exotic marram grass has been eradicated from the dunes at Sealers Bay.

South Georgian diving petrels breed from September to February, but details are very poorly known in New Zealand as the unstable sand dune nest sites are too fragile to allow study. Elsewhere, the birds lay a single white egg and share incubation and chick rearing duties. The chicks are fed daily, usually by both parents.

South Georgian diving petrels are nocturnally active at their breeding colonies. The birds fly in directly and land very close to their nest site. Birds only begin returning once it gets quite dark. Prospecting birds can be found on the surface at night but are quiet. Some birds call occasionally in flight. The calls are similar to those of common diving petrels but are easily separable with comparative experience. At sea, South Georgian diving petrels spend much of the day diving for prey items and can dive to depths of 50 m. Diving petrels collectively have a distinctive flight action with fast whirring wings.

The diet of South Georgian diving petrels is poorly known in New Zealand. Krill and juvenile fish and squid were found in two specimens. Krill and copepods are the major diet items at other colony sites. The species mostly feeds by day. Unlike other petrels, diving petrels do not produce stomach oil to feed their chicks.

A small chunky petrel, black above and white below, with a short neck, wings and tail, and a dark capped head with grey feathering behind the eyes which extends up like ear-muffs. In the hand, the rump feathers have white bases, the tail is forked in some NZ individuals, the stubby black bill has pale blue edges, and the legs and feet are mostly blue with some black margins.