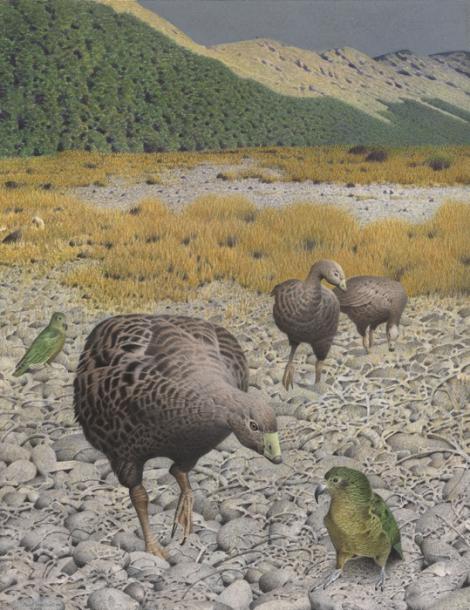 The South Island goose was a large goose whose closest living relative is probably the Cape Barren goose. It was one of two closely-related New Zealand geese species, and was larger than its North Island cousin. It was flightless with much reduced wings, and had a modified second toe which formed a spur and may have been used for fighting.

The South Island goose was a very large bird. At 18 kilograms and standing 1 metre tall, it would have been as large as some of the smaller species of moa, and considerably larger than the closely-related North Island goose. It was terrestrial, flightless and had short wings and a shortened tail

South Island geese occurred widely throughout South Island grassland and scrubland habitats. They were most numerous in the drier eastern regions, including coastal and central Otago, where these habitats were more common.

South Island geese were probably never numerous due to their preference for grassland habitats, which were of limited extent in primeval New Zealand.

Due to their large size and flightlessness, South Island geese were much hunted by early Polynesian settlers. Their remains are widespread in midden deposits. Over-hunting is the most likely cause of their extinction, which occurred long before European arrived in New Zealand.

South Island geese are thought to have relatively good eyesight, possibly in response to predation pressure from Haast’s eagle.

The South Island goose was a browser of grasses and plants from grassland habitats. It had a robust bill with a squared-off end, well-suited to cropping short grassland swards.

A very large terrestrial goose similar to Cape Barren goose but flightless, with short wings and a shortened tail. It weighed up to 18 kg and stood up to a metre tall, as large as the smaller moa species and markedly larger than the closely-related North Island goose.