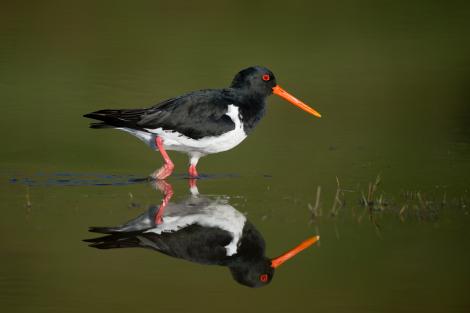 The South Island pied oystercatcher (SIPO) is the most abundant oystercatcher in New Zealand. The conspicuous black and white plumage and long red bill make this a familiar species. It is found on most estuaries, with numbers greatest during the period December to July. Fewer birds remain in coastal areas during the rest of the year, with most of the population moving to inland South Island riverbeds and farmland to breed.

The ‘SIPO’ is one of two species of oystercatcher on the New Zealand mainland. Solidly built, it is a striking black-and-white wader with a long, stout red bill and thick pink legs. There is a sharp border on the lower breast between the black upperparts and white underparts. In flight there is a white wingbar, rump and lower back. The sexes are similar. Juveniles have a brownish tinge to their plumage, dusky red bill and dull pink legs.

Similar species: can be confused with pied morph of variable oystercatcher, but the latter has a smudgy border on the chest and in flight has less extent of white, also with smudgy edges to rump and lower back.

SIPOs occur throughout New Zealand in most estuaries and harbours. They usually breed inland in the South Island, mainly east of the Southern Alps on riverbeds and farmland, but are also known to breed on high country grasslands, and in coastal areas adjacent to estuaries and lagoons. Breeding has been attempted in Hawke’s Bay and southern Wairarapa since the 1980s. SIPOs migrate to coastal areas of both the North and South Islands after breeding. They have occurred as vagrants in Australia, New Caledonia and Vanuatu, and on Lord Howe, Norfolk, Kermadec, Chatham, Snares, Auckland and Campbell Islands.

SIPOs have survived all the threats introduced to New Zealand during the past few centuries since the arrival of humans. These include the introduction of mammalian predators, hunting by humans (until 1940), and invasion of braided riverbed nesting areas by tall vegetation. Future abundance may now be threatened by land use changes in breeding areas, pollution of winter feeding areas, and increased disturbance to feeding and roosting birds at coastal sites.

South Island pied oystercatcher breed in spring and summer. Nests are unlined scrapes on a mound or raised area of sand, gravel or soil with good visibility all around. Both members of the pair incubate the 1-3 eggs and care for the young. Incubation takes 24-28 days, and the young fledge 28-42 days after hatching. Most birds commence breeding when 3 years old.

Oystercatchers are strong fliers and have highly ritualised displays. On the ground they undertake loud piping displays to warn off other oystercatchers from feeding and breeding areas. Banded birds from one inland area in South Canterbury left their breeding territories during December-January and moved to coastal areas from Otago to Northland, with most individuals returning to the same estuary year after year. The pair bond is not maintained outside of the breeding season, although most birds retain their partner from one breeding season to the next. Banding shows that about 89% of adults survive from one year to the next, and so the oldest birds would live for about 25 years.

A large solidly-built black-and-white wader with a long straight bright orange bill and stout pink legs. The sharply delineated border on the lower breast between the black upperparts and white underparts is diagnostic.

Calls by birds on mudflats at low tide

Calls from pair on the wing (black & pied stilts in background)