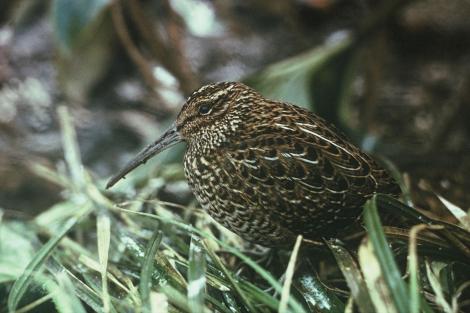 New Zealand snipes are shorebirds that have gone bush. About the size of a short-tailed, long-beaked blackbird, the South Island snipe survived until the 1960s on Taukihepa (Big South Cape Island), a muttonbird (titi) island south-west of Stewart Island. Snipe were well known to the muttonbirders as their alter-ego, the hakawai – an unseen and terrifying call from the night sky. Considered by many to be given by an invisible spirit bird, the hakawai display is given by all living forms of Coenocorypha snipe. The display includes a roar created by vibration of the tail feathers as the bird dives at speed through the night sky, homologous with the drumming displays of Gallinago snipe.

The South Island snipe was one of six species in the genus Coenocorypha from New Zealand, of which three became extinct following human contact. Outside New Zealand, Coenocorypha snipe also occurred in Fiji, on Norfolk Island, and in New Caledonia. These three forms are also extinct, and are known from a few subfossil bones.

Voice: few details known. A low hoarse double croak given by birds of a pair when separated (probably by the male, based on Snares Island snipe behaviour); a hand-held chick gave a “dolorous wailing” (Guthrie-Smith). The hakawai aerial display was a series of disyllabic calls followed by a non-vocal roar made by the vibrating tail feathers.

Similar species: South Island snipe differed from Snares Island snipe in having bold chestnut markings on their backs, a gorget of blackish crescents across their chests, and unmarked bellies (finely barred in Snares Island snipe). The only other small ground bird present on muttonbird islands (previously including both Jacky Lee Island and Taukihepa) was the banded rail (mioweka).

Subfossil bone deposits reveal that the South Island snipe occurred throughout the South Island and on Stewart Island and some offshore islands (Native and Ruapuke Islands). Specimens and well-documented sightings by naturalists were known from only Jacky Lee Island and Taukihepa (both off Stewart Island). Muttonbirders reported snipe also from Pukeweka, Solomon, Mokoiti and Herekopare Islands, and hakawai also from Mokinui, Kundy, Green and Breaksea (Rukawahakura & Wharepuiataha) Islands. Recorded from dense Muehlenbeckia and supplejack vines and tree nettle under tree daisy forest on Jacky Lee Island. Throughout vegetated areas on Taukihepa, including coastal tree daisy forest and inland rata forest. Following the introduction of weka to Taukihepa, snipe became confined to open ‘pakihi’ vegetation of low Dracophyllum longifolium (grass tree) and manuka scrub over Cladia lichen fields on the tops of the island.

Never numerous. John McLean & Guthrie-Smith saw only a single bird on one of three brief visits to 30 ha Jacky Lee Island during September-November 1911. Herbert Guthrie-Smith found three nests and knew of five pairs on Taukihepa in November 1923. Edgar Stead and companions found five nests and encountered six birds away from nests during 8 days of searching in November –December 1931. Brian Bell and Don Merton saw a single bird during a month on Taukihepa in April 1961. No population estimates were made.

South Island snipe became extinct in or soon after 1964 following the ship rat invasion of Taukihepa. Apart from a possible record from Dusky Sound, Fiordland, in 1773, the only sites where naturalists saw the South Island snipe were Jacky Lee Island between 1897 & 1911, and Taukihepa between 1913 & 1964. Snipe on Jacky Lee Island (the type locality) became extinct following the introduction of weka by muttonbirders between 1911 & 1928. Snipe on the South Island and Stewart Island were probably extirpated by Pacific rats (kiore) introduced by Maori. The Wildlife Service attempted to catch snipe for translocation to a safe site in August 1964, but the two male birds captured both died in captivity before they could be moved.

Eight nests found under low Dracophyllum and manuka on Taukihepa in 1923 & 1931 all contained two large eggs. Incubation was shared by the male and female, and chicks left the nest as soon as they were dry. Guthrie-Smith recorded two adults together caring for a single chick, while Stead recorded a chick with a single adult (the latter is typical of all other Coenocorypha snipe). Both incubation length and the period to chick independence are unknown.

Both McLean and Guthrie-Smith noted that South Island snipe showed little concern at human proximity: “the bird shewed no concern at my presence except that it kept amid the patch of ferns & creeper & I never got closer than 12 – 15 feet & even then it was often hidden. Its manner of running a few feet & then stopping to probe amid the fallen leaves was very noticeable & it was too intent upon this work to take any more heed of us than to keep just out of our way” (McLean in Miskelly 2012). Hakawai aerial displays were given mainly on clear moonlit nights, probably to minimise the risk of snipe colliding with flying petrels (which are both more visible and less likely to come ashore on moonlit nights).