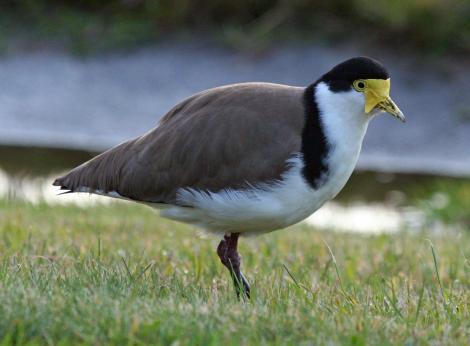 The New Zealand spur-winged plover population has a unique conservation trajectory among our native bird species. In just over 80 years since the first breeding record, it has gone from a fully protected native to having that protection removed in 2010. First recorded breeding near Invercargill in 1932, it subsequently spread northwards through the country, becoming established in Northland in the 1980s. A bird of open country, it is an obtrusive, noisy addition to habitats ranging from riverbeds and sea and lakeshores to agricultural pasture and urban parklands. Common names for birds can be a linguistic minefield, but our spur-winged plover should not to be confused with a species of the same name that occurs in central Africa. Given that it is actually a lapwing, perhaps it would have been easier if we had adopted its Australian name - masked lapwing.

The spur-winged plover is a large stocky wader with pronounced yellow bill and wattles, and yellow eye ring. Black on the crown and hind neck becomes a black collar extending to sides of the breast. The rest of the head, neck and under parts are white, the mantle, back and coverts are uniform light grey-brown contrasting with a white rump. The black tail has a white base and thin white tip. The long legs are reddish brown. A long yellow spur protruding from the carpal area of each wing gives the species its name. The flight pattern of the spur-winged plover - shallow beats of broad rounded wings - is unlike any other New Zealand wader.

Spur-winged plovers are now widespread in a wide range of open habitats throughout New Zealand. They may be found in almost any area with low vegetation, often near water: from the margins of marine and terrestrial wetlands, riverbeds and lake shores to estuaries and beaches, to farm pastures and almost any grassland in urban areas, playing fields, parks or even road verges. Spur-winged plovers are resident on the Chatham Islands, and vagrant birds have been recorded from the Kermadec, Bounty, Snares, Antipodes, Auckland and Campbell Islands.

The spur-winged plover is abundant. A 1994 estimate of c.3,600 was based on birds counted at harbours and estuaries, and was a gross underestimate of a species that occurs widely in many different habitats

Fully protected since 1946, a growing number of complaints about spur-winged plovers from a broad spectrum of the community – private individuals, regional councils, conservation organisations, and hunting interests – led to that status being removed in 2010. They join southern black-backed gulls as the only native species without some level of legal protection. The horticultural industry and market gardeners complained of crop damage, particularly to green-leafed vegetables such as cauliflower, broccoli and lettuce. Others believed them to be causing problems for other native species; for example, there is video footage of a spur-winged plover destroying a New Zealand dotterel egg, and also limited reports of them attacking other native birds. However, according to a Department of Conservation discussion document, ‘while they are aggressive and may displace other indigenous species from habitats, their overall impact on other native species are considered not significant.’ The bulk of concerns related to ‘interactions’ with aircraft. Of the 1406 incidents of bird strikes (or near misses) reported to the Civil Aviation Authority from October 1999 to September 2004 where the species was identified, 37 per cent were spur-winged plovers. There also appeared to be an upward trend in the number of incidents as the species continued its expansion through the country. The proportion of incidents where spur-winged plover were involved was 8 per cent in 1988, 11 per cent in 1989, 14 per cent in 1990 and 22 per cent in 1991. Nearly half of reported incidents were strikes.

Spur-winged plovers breed as isolated pairs, and are monogamous with shared incubation and chick care. They nest in a wide range of open habitats such as wetland edges and saltmarsh, but most commonly occur in areas associated with human activities, including pasture and cropland, urban parks and golf courses and even the roofs of buildings. (One pair nested on an office building roof in the inner Auckland suburb of Newmarket.) Most nests are a simple scrape that may be lined with various nearby materials –including dried grass or twigs, small pebbles and sheep droppings. The 3-4 eggs are olive-yellow, -brown or -green with irregular dark brown or purple spots and blotches. Laying is usually June to November. Incubation takes 30-34 days, with precocial chicks leaving the nest almost immediately after hatching, fledging at 6-7 weeks and independent after 8-9 months.

This very successful recent coloniser is now a highly visible and often loud presence in open areas throughout the country. Their success is clearly linked to human modifications of the landscape, especially from agricultural and urban development. Their loud staccato cry, often in response to disturbance, is unmistakable. They are vigorous defenders of their territories, and are commonly seen mobbing swamp harriers.

A large stocky wader with yellow bill, facial wattles, eye rings and 'spurs' at the carpal joints of each wing, black on the crown and hind neck extending to the breast, and long reddish-brown legs. The rest of the head, neck and under parts are white, the mantle, back and coverts are uniform light grey-brown contrasting with a white rump, and the black tail has a white base and thin white tip.

Calls from nesting pair (skylark and Canada geese in background)