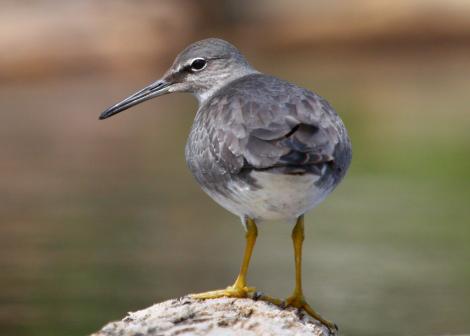 The wandering tattler is a medium-sized, straight-billed wader with a dark grey upper body and upper breast, with dense grey barring on the white underparts in breeding plumage. In non-breeding plumage this changes to a more uniform grey breast and flanks with white lower breast and belly. Short white eyebrow stripes do not extend past the eye, but often meet on the forehead. These lie above dark loral stripes, which contrast with narrow white eye-rings. The bill is dark grey grading into dull yellow at the base. The legs are yellow and of medium length. The very long wings give the bird an attenuated rear end, adding to its graceful profile. Wandering tattlers often teeter or bob when feeding.

Voice: a whistled, rippling trill of 6-10 syllables, often against a background of breaking surf.

Similar species: the very similar grey-tailed tattler is best distinguished by its 2-syllable call. Other more subtle differences include overall paler grey plumage of the grey-tailed tattler, less barring on underparts in breeding plumage (the belly and undertail coverts remain white), longer white eyebrows extending behind the eye and not meeting on the forehead, and shorter wings not extending much beyond the tail. Grey-tailed tattler also has a shorter nasal groove on the bill (less than half the bill length, cf. more than half in wandering tattler), and 4 or fewer primary tips extending beyond the tertials on the folded wing (cf. 5 in wandering tattler).

Wandering tattlers are typically birds of exposed, rocky coasts, with reefs or rock platforms rather than mudflats.

The wandering tattler is a rare visitor to New Zealand with far fewer records than for grey-tailed tattler. Mainland records extend from Spirits Bay (Far North) to Brooklands Lagoon (Canterbury), with several records from the Kaikoura and Marlborough coasts. Both species of tattlers have occurred on wave platforms on Kaikoura Peninsula, and so all distinguishing characters need to be checked. Offshore and outlying island records are from Raoul, Macauley and Curtis Islands (Kermadec Islands), and Cuvier, Red Mercury and Portland Islands, Chatham and Rangatira Islands (Chatham Islands) and Enderby Island (Auckland Islands).

The wandering tattler is a long-distance migrant. Most New Zealand records are of single birds.

A medium-sized wader with a dark straight bill, dark grey upperparts, upper breast and flanks with a white lower breast and belly. It has narrow white eye-rings, a short white eyebrow stripe and dark loral stripe that does not reach beyond the eye, and medium length yellowish legs.

Calls from a bird on a sand flat