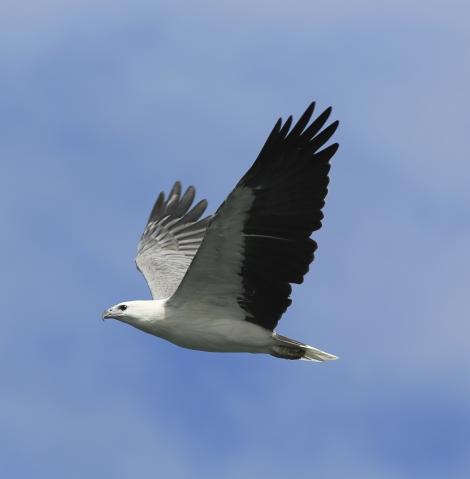 The white-bellied sea eagle is a very large Australian eagle that is a rare vagrant to New Zealand. It is generally associated with coastal and wetland habitats where it is well known for dramatically snatching fish from the surface of the water. The striking white breast and head, large hooked bill and huge deep rounded wings are quite unlike any resident New Zealand bird species. It could however be confused with other large raptors from overseas, and questions remain over the validity of reported sightings in New Zealand.

A large eagle with a large hooked bill, solid un-feathered legs and substantial taloned feet. Adults have an unmistakable white head and breast, and a pale grey back that when perched makes them very conspicuous. In flight they have a rather stubby wedge-shaped tail and huge deep rounded wings that they hold in a stiff upswept curve. Adults have black flight feathers that divide the under-wing into distinctive black and white triangles. Younger birds have a pale-tipped streaked dark-brown back and a brown head. The brown feathers become lighter with successive moults leading to age-related brown/white/black patterning on the underwing. All but adults have prominent white windows on the underwing.

Voice: ‘honk-honk-honk’ rapidly repeated, or loud and explosive ‘ank-ank-ank’. The calls are deep and basal, and somewhat goose-like.

Similar species: the swamp harrier’s bill, legs and feet are noticeably slight in contrast to the robust features of the sea-eagle. The swamp harrier is far more delicate all round, having relatively narrow wings and a long square tail, in comparison to the deep rounded wings and wedge-shaped tail of the sea eagle. The swamp harrier also has a distinctive cream coloured rump which is absent in the seaeagle. Other large birds of prey that could potentially reach New Zealand that could be confused with the sea-eagle include the wedge-tailed eagle and the osprey.

Found around the coast, on rivers and lakes in Australia. Can venture some distance inland but not into the Australian interior. Occurs throughout most Indonesian Islands, south-east Asia, as far west as India and as far east as the Solomon Islands.

Considered a vagrant to New Zealand based on  a specimen donated to Buller by Gould, which was apparently collected in New Zealand. There are several unconfirmed historical records mentioned in Oliver (1955), including Rakaia river (1866), Matukituki bush, Otago (1870), Wellington Harbour (1873), Tuarangakumu, Hawkes Bay (1935), and Nelson and Marlborough (1953).

Well-known for their ability to catch fish, white-bellied sea eagles generally enter a shallow dive from a high perch, until they are gliding close to the surface of the water; stalling, they plunge their talons into the water to grasp their prey. They then use powerful wing-beats to propel themselves upward and forward, often without entering the water at all. They will also plunge into water from soaring or from cumbersome hovering flights. Nests are a huge pile of sticks that are added to each year. These are situated near water, in large trees, on cliffs or sometimes on ground.

White-bellied sea eagle feed mainly on fish and sea-snakes but will also take young water birds, reptiles and mammals. They also pirate prey off other birds of prey and take some carrion.

A large eagle with a white head and breast, dark grey-black back and wings with white on the front third of the underwings, large dark hooked bill, solid un-feathered legs, and large taloned feet. In flight the wedge-shaped tail is stubby and the huge deep rounded wings are held in a stiff upswept curve; young birds have a pale-tipped streaked dark-brown back and a brown head.