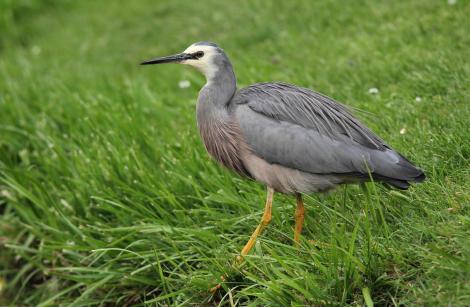 The white-faced heron is New Zealand's most common heron, despite being a relatively new arrival to this country. It is a tall, elegant, blue-grey bird that can be seen stalking its prey in almost any aquatic habitat, including damp pasture and playing fields. Because it occupies space also shared with people it is usually well habituated to their presence, and may allow close approach.

The white-faced heron is a medium-sized heron with primarily blue-grey plumage. As the name suggests it has white on the face and the front of its neck. The back is medium blue-grey with the chest and underside more brown-toned. In breeding plumage, white-faced herons have strap-like grey plumes on the back, and shorter pinkish brown plumes on the breast. The dagger-like bill is dark grey, dull yellow at the base, and the legs are pale yellow. In flight the white-faced heron usually tucks its head back towards its shoulders in the characteristic heron posture, but it will also fly with the neck out-stretched. Its open wings show contrast between the pale grey fore-wing and dark grey main flight feathers on both the upper and lower surfaces. Immature birds lack the white face.

Similar species: the reef heron is similar in size but is much darker and uniform in colour and has a more hunched stance than the white-faced heron

White-faced herons occur throughout Australia, New Guinea and New Zealand. They are a relatively new species in New Zealand, having self-introduced in the 1940s. From the 1950s onwards numbers have grown rapidly and they are now widespread throughout the country, including the Chatham Islands. It is primarily a bird of rocky shores and estuary mudflats, but can also be found near the shallow edges of lakes up to 500 m altitude, and on farm ponds. Following rain, white-faced herons are often seen in damp pasture and on sports fields, including within urban areas.

White-faced herons have been recorded as vagrants at the Kermadec Islands, Snares Islands, Antipodes Island, Auckland Islands and Campbell Island.

The white-faced heron is one of New Zealand's commonest large birds.

White-faced herons are usually tree-top dwellers, favouring the tops of large pine trees or macrocarpa growing near water. They have also been known to nest on man-made structures. A loose platform is built where the 3-5 eggs are incubated by both parents. There is usually only one nest per tree, but some breed in loose colonies. In northern areas, nesting starts as early as June, but is later further south. Laying peaks around October. Incubation takes about 26 days. It is unusual for more than two chicks to be raised per brood.

Foraging white-faced herons walk slowly with long, controlled steps, watching for any signs of prey, which is grabbed with lightning speed. When white-faced herons occur at high densities, e.g. on mudflats, aggressive displays may be directed to other herons that approach too close. Roosting white-faced herons perch in trees or on top of man-made structures such as street lights. They roost solitarily or occasionally as pairs. During courtship and nesting, white-faced herons raise their plumes, and they may perform aerial displays near the nest.

A medium-sized blue-grey heron with white face, long dark grey bill, and pale yellow legs. In flight the open wings show a marked contrast between the pale grey fore-wing and dark grey main flight feathers on both the upper and lower surfaces.