Geographical variation: Several forms have been named, and some authorities recognize two different species. The form candida breeds at the Kermadec Islands, plus Norfolk and Lord Howe Islands, and widely throughout the tropical Indian and Pacific Oceans. 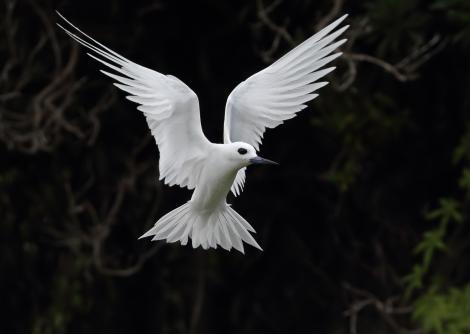 The ethereal white tern is among the most elegant and graceful of the world's 275 seabird species. It is widely distributed in tropical and subtropical seas, but is one of the rarest breeding species in New Zealand. Up to ten pairs nest on Raoul Island in the Kermadec Islands, the only New Zealand breeding location. On rare occasions they straggle south to waters off the Three Kings Islands, Northland, Manawatu and the Kapiti coast. Its long wings and tail are almost transluscent when seen from below. Uniquely among terns, the white tern’s bill curves slightly upwards and tapers to a sharp point. They do not prepare a nest, but lay a single egg balanced on a bare branch, in a fork or slight depression, or on the midrib of a palm frond.

The white tern is a slender almost all-white bird with long, tapering wings, a short slightly forked tail, and a blue-and-black bill which curves slightly upwards and tapers to a sharp point. The legs are black at the top, grading to bluish-grey, with yellow webs on the feet. The eyes are surrounded by a black patch that extends towards the bill. The sexes are alike. Juveniles are brownish-grey on the back, with grey on the neck and a black mark behind the eye. White terns fly strongly with an undulating motion and slow, deep wingbeats. They are capable of sustained hovering. Their closest relative is the smaller grey noddy. Both species have prominent dark eyes with a small black patch that surrounds the eye and extends towards the bill, making the eyes appear larger. In contrast to the blue-grey wings of the grey noddy, the white tern has pure white plumage

Voice: the white tern’s main call is a gutteral heech heech; they make "wheezing and twanging" sounds at intruders.

The white tern is a widespread tern of tropical and subtropical seas in the Indian, Pacific and south Atlantic Oceans. They breed on tree-covered tropical and subtropical islands, and forage over lagoons, close to atolls and islands, and at sea. The white tern is one of the rarest breeding species in New Zealand, where they nest only on Raoul Island in the Kermadec Islands. Up to ten pairs nest in trees along the south-east coast from Boat Cove to Sunshine Valley.

White terns are resident year-round on some islands, and are seasonal (breeding) visitors to others; their non-breeding movements remain unknown. They straggle rarely to waters off the Three Kings Islands, the Northland coast, and the Manawatu-Kapiti coast, with most sightings during March-July. There are about a dozen records from the North Island and three from the South Island: Hokitika (undated), Ettrick, Otago (March 1945), and Greymouth (January 2002).

The New Zealand population of white terns is c.10 pairs, with the global population numbering in the hundreds of thousands.

Introduced feral cats and rats killed breeding birds and took eggs on Raoul Island up until they were eradicated on the island in 2002. IUCN Red List classifies it as Least Concern. The Department of Conservation classifies it as Nationally Critical, breeding at one location only in New Zealand, but secure overseas.

White terns breed as single pairs or in small colonies of 2 - 3 pairs at Raoul Island, nesting in the same tree on different branches, up to 15 m above ground. Up to 20 birds have been seen flying at Raoul Island and up to ten pairs recorded breeding. On Raoul Island, the breeding season is September to April. Courtship involves elaborate aerial displays in which the male flies up to 500 m high at speed, followed by the female. The pair then glides and zigzags downwards before "strutting" together on the ground with tails raised and wings dropped. Pairs also appear to whisper to each other, hence the name, lover tern. White terns are monogamous. The single pale egg with dark and grey markings is laid October-December on a slight depression of a bare branch or fork, up to 15 m off the ground. Both adults share incubation of 28-36 days and care for the young. The chick grips the branch tightly with its claws, and remains on the branch until fledging at 60 -75 days old. After fledging, young birds stay with parents to be fed and learn how to catch prey before becoming independent.

White terns are not sociable. Birds forage singly or in pairs over lagoons, close to atolls and islands, and at sea. Nest sites are aggressively defended from other white terns, with intruders repelled by bill grappling and jabbing. The oldest white tern recorded was 17 years old.

White terns catch and eat fish, including flying fish, crustaceans and squid. Prey are caught by the tern hovering into the wind and surface-dipping or surface-diving (without fully submerging). White terns also take flying fish on the wing and forage around dolphins and large predatory fish. The types of prey species taken, and the tern’s large eye suggest that dawn and dusk foraging are important.

A slender almost all-white medium-sized tern with long tapering wings, a short forked tail, and a blue-and-black bill that curves upwards to a point. The legs are black grading to bluish-grey with yellow webs on the feet and the prominent dark eyes have a small black patch surrounding them that extends towards the bill, making the eyes appear larger.

Calls from roost in trees (roosters in background)

Calls from birds near nest