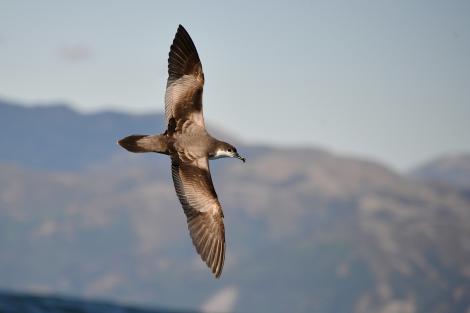 Buller’s shearwaters is a medium-large shearwater, brown-grey above and white below, with long broad wings and a long pointed tail in flight. They have a dark-brown cap extending to just below the eyes, contrasting sharply with their white cheeks. The upper body surface is brown-grey with darker brown-black feathers running across the upper wings in an M-shape, and brown-grey on the rump contrasting with the much darker tail. The entire underside including the underwings is white. In the hand, the bill (38-45 mm long) is grey-black with a sharp hook to seize prey. The legs and feet are dark brown-mauve on the outside and pink on the inside.

Voice: the calls of Buller’s shearwaters resemble those of sooty shearwaters with wailing, cooing and groaning sounds.

Similar species: several other large brown-above-and-white-below shearwaters occur rarely in New Zealand waters; none have the strongly patterned two-tone upper-surface of the Buller’s shearwater. Pale morph wedge-tailed shearwaters are more uniformly dark above and duskier on the underwing. Great shearwater has a pale nape contrasting strongly with a blackish cap, a pale crescent on the rump, and a variable dark belly patch. Pink-footed shearwater has a pink bill with a dark tip, and is darker underneath than the very white Buller’s shearwater.

The sole breeding grounds for Buller’s shearwaters are the Poor Knights Islands off Tutukaka, northern New Zealand. (There is a single record of a nest being found on Simmonds Islands, Henderson Bay, Far North.) Within the Poor Knights Islands, Buller’s shearwaters are extremely abundant on both main islands. The colonies on Aorangi are scattered whereas those on Tawhiti Rahi are much denser. The breeding burrows are normally dug on well-drained slopes in dry spongy soils or in clay soils amongst rocks. The nests are under tall pohutukawa forest or amongst Astelia or Xeronema patches on ridgetops. Some burrows are under low coastal shrubs such as ngaio. Buller’s shearwaters forage over warm water north of 45°S, either over shallow inshore seas or over deep water beyond the continental shelf. After the breeding season, they migrate to the central South Pacific before heading north to complete the annual feather moult in the North Pacific Ocean east of Japan.

There are no recent robust estimates of population size from the breeding islands. The population was thought to be 2.5 million birds in the 1980s. Recent rapid surveys on Aorangi Island suggest there may be fewer than 100,000 pairs using this island, less than half of the estimate made in 1981.

There are currently no land-based threats to Buller’s shearwaters. The breeding islands previously had feral pigs on Aorangi Island but these were eradicated in 1936. New introductions of mammalian predators are a potential risk, as are fires on these dry northern islands. At sea, oil spills are a major threat with the colony lying close to the shipping lane for the main oil terminal in New Zealand. The 2011 Rena oil spill resulted in the deaths of at least 156 Buller’s shearwaters that became coated in oil. Some Buller’s shearwaters are caught as by-catch during fishing operations. Harvesting of shoaling fish is also a threat to the shearwaters, as they regularly feed over fish shoals. The large fish drive small prey to the surface, which allows the shearwaters to access small fish and krill.

Buller’s shearwaters breed from September to May with the single large (65 x 43 mm) white egg laid from late November to mid- December and hatching in January. The egg is laid in a lightly lined nest at the back of burrows that are 0.6-3.2 m long. Buller’s shearwaters are considered to be sensitive to human disturbance and as a result the breeding biology is still poorly known. Incubation takes about 51 days, and the chicks fledge in May, when about 100 days old. There is no information available on age of first breeding or annual breeding success rates.

Buller’s shearwaters are nocturnally active at breeding grounds. The first birds start flying over the islands soon after sunset and birds come ashore throughout the night. Prospecting birds are noisy on the surface at night, calling from burrow entrances and near burrows. The calls resemble those of sooty shearwaters. At sea, Buller’s shearwaters range widely away from the breeding colonies, foraging over the continental shelf around both the North and South Islands, but also regularly flying east towards the Chatham Islands and beyond. They are often seen from ships and boats but normally don’t follow boats unless food scraps or offal are available. Buller’s shearwaters are trans-equatorial migrants, flying north to the seas between Hawaii and Japan during the austral winter, and back to New Zealand via the west coast of North America and the central Pacific Ocean.

The diet of Buller’s shearwaters is still poorly known. Small krill are sometimes regurgitated by adults when handled. Small fish are also likely to be taken and squid beaks have been reported from some birds. There is no information yet on whether they feed at night as well as during the day.

A medium-large shearwater, brown-grey above and white below, with long broad wings, a dark-brown cap extending below the eyes, white cheeks, grey-black hooked bill, dark legs, and a long pointed tail in flight. The upperparts are brown-grey with darker brown-black feathers forming an M-shape across the upperwings, and brown-grey on the rump contrasting with a much darker tail.