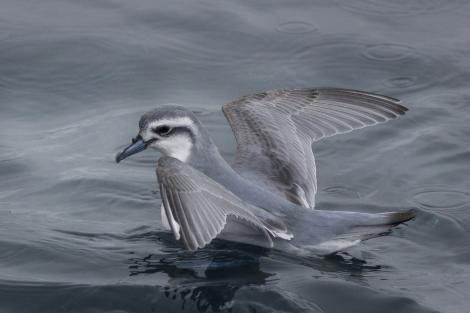 The thin-billed prion is an abundant small seabird of the Falkland Islands, southern Chile, and the southern Indian Ocean (Kerguelen Islands). They are very similar in appearance to the five other prion species: blue-grey and black above, and white below, with blue-grey bill and blue legs. Thin-billed prions do not breed in the New Zealand region, but low numbers are often found storm-wrecked on beaches in late winter, especially on the west coast of the North Island.

All six prion species are very similar in appearance and behaviour, differing mainly in bill shape. All are medium-small seabirds that are blue-grey above and white below, with a blackish ‘M’ across the back from wingtip to wingtip, a black tip to the upper tail, blue-grey bill, and blue legs and feet. The dark ‘M’ is less pronounced in the thin-billed prion than in the other prion species.

Similar species: as its name suggests, the thin-billed prion has the narrowest and least robust bill of all the prions (9.5-12.5 mm wide). It also has a paler face, with a more prominent white stripe above and behind the eye. The facial markings are similar to some populations of fairy prion, which differ in having a more robust bill and a broader black tip to the upper tail. Antarctic prion is similar but with darker face markings and generally wider bill (11-15.5 mm wide).

Thin-billed prions are the most abundant prion species around the southern tip of South America, with large colonies in tussock covered slopes of the Falkland Islands and on Isla Noir, southern Chile. They also breed in large numbers among other prions on the Kerguelen Islands in the southern Indian Ocean, with small numbers on the nearby Crozet Islands. They are mainly winter visitors to the New Zealand region, where they make up a minor component of winter prion wrecks. The largest strandings were 1326 birds in 1974, 1410 birds in 1986, and 1153 in 2011 (during an enormous mortality event affecting mainly broad-billed prions).

At sea, thin-billed prions occur in large, loose flocks near breeding colonies, or associate with flocks of other prion species. The birds that reach New Zealand seas in winter are thought to be predominantly from the Kerguelen population.  There are few claimed sightings of thin-billed prions off the New Zealand mainland, but this is partly due to the extreme difficulty of separating prion species at sea.

Most remaining breeding islands are free of introduced predators, but feral cats are present on large parts of the main Kerguelen Island.

Thin-billed prions are colonial, returning to breeding sites from late August and laying the single white egg (48 x 35 mm) in mid November. They breed as monogamous pairs, sharing incubation (46-47 days) and chick-rearing (43-54 days), with the young departing from mid February to early March.

Thin-billed prions occur in large flocks near their breeding islands, often mixed with other prion species. They are generally not attracted to boats. They visit breeding sites after dark and depart before dawn, or stay in burrows or nest crevices during daylight. Many birds from the Kerguelen Islands disperse eastward outside the breeding season, and are often found storm-wrecked on the south coast of Australia and the west coast of New Zealand.

Thin-billed prions mainly eat small pelagic crustaceans, particularly amphipods, also krill and some small fish and squid. Food items are mainly captured by shallow dives or surface-seizing while hydroplaning – facing into the wind with wings extended, and dipping the head and neck into the upper 10 cm of the water column.

A small prion, blue-grey above and white below, with a blackish ‘M’ across the back from wingtip to wingtip, a black tip to the upper tail, blue-grey bill, and blue legs and feet. In the hand it has the narrowest and least robust bill of all the prions, a paler face with a more prominent white stripe above and behind the eye, and a less pronounced dark ‘M’ across its back.