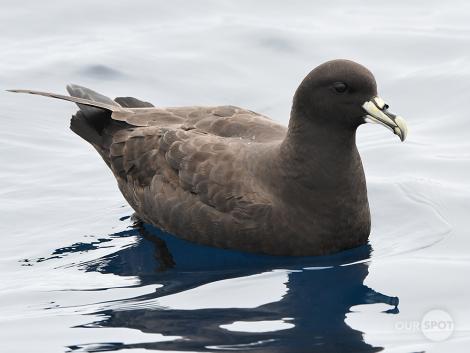 White-chinned petrels are large, heavily-built seabirds that are uniform sooty-black with black legs and feet. They have a varying-sized and shaped white patch on the chin or throat; some birds have no white-chin. The bill is large and stout, and pale with black saddle on upper mandible between nostrils and unguis.

Voice: white-chinned petrels rarely call at sea, but are vocal on the ground during the breeding season.

The largest population of white-chinned petrels in New Zealand is in the Auckland Islands, with 200,000 breeding pairs on Disappointment Island. There are large numbers on Antipodes and lesser numbers on the stacks off Campbell Island. Other populations around the world range up to 750,000 pairs (South Georgia).

White-chinned petrels are colonial breeders, nesting in short to long (1-3 m) burrows. Many burrows have waterlogged entrances and tunnels, but the nest is dry on a raised pedestal. White-chinned petrels are monogamous, with shared incubation and chick care. Adults attend the colony from October to May, with a single white egg laid in late November-December. Incubation is shared and takes 57-62 days. Chicks hatch from late January-February and are left unattended during daylight when 5-8 days old. Both parents feed the chick by regurgitation every 1-6 days. Chicks fledge in April- May at 87-106 days old.

White-chinned petrels are silent at sea, although have been recorded calling when around fishing vessels competing with other birds for discards and offal. They are vocal on the breeding grounds; when at the colony, they have two main calls; ‘Wheezing’ – a wheezy groan used to threaten intruders during territorial disputes, and ‘Rattle’ – loud quacking calls that are repeated frequently just after dark and before dawn. The Rattle call is used mainly by males to attract females to the burrow location, but also in duets between males and females in the burrow. Low, soft ‘Moaning’ calls have been heard when males and females are bonding in the burrow together or bonding with the chick. A high-pitched ‘Squeal’ also occurs on Antipodes Island usually in response to threats.

The main food items of white-chinned petrels are squid, salps, fish and crustaceans, although numbers and types of prey items alters during the breeding and non-breeding periods. Squid appears to be the main food item taken in New Zealand. Most food is taken from the surface, by shallow diving on or just above the surface of the water. White-chinned petrels readily take offal and discards from fishing vessels.

A large heavily-built petrel with uniform sooty-black plumage, a stout pale creamish-coloured bill with a black saddle on upper mandible between nostrils and unguis, and black legs and feet. They have a varying-sized and shaped white patch on the chin or throat; some birds have no white-chin.