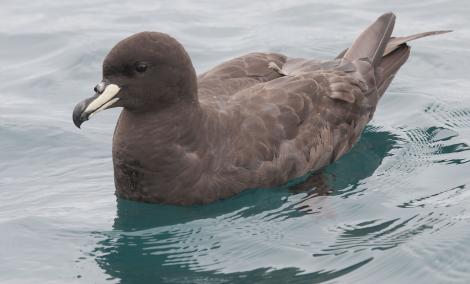 The Westland petrel is the largest burrowing petrel still breeding on the New Zealand mainland, where its large size and aggressive temperament afford some protection from the introduced predators that have destroyed other mainland petrel colonies. The egg is incubated continuously, and the chick, once hatched, is constantly guarded for up to 6 weeks by one or both parents, providing protection from predators during these vulnerable periods. Westland petrels are mostly nocturnal on land, returning to their breeding colonies at dusk, and can be seen rafting in preparation to land along the coast adjacent to the sole breeding colony at Punakaiki. Most birds leave the colony before dawn.

The Westland petrel is a large, all-dark petrel. It has a chunky look to it, being large-bodied and with a stout bill, which is pale yellow with a dark tip. The plumage is entirely dark brownish-black, apart from odd white feathers evident in a few individuals. The legs and feet are black. The only other similarly-sized dark petrel in New Zealand waters is the white-chinned petrel.

Voice: Westland petrels produce quacking, humming, and braying sounds on the breeding colony, with a rather nasal sound.

Similar species: white-chinned petrel is the same size and build, but has an entirely straw-coloured bill, without the dark tip. Black petrel is very similar but smaller (700 g) with a less robust bill, and a proportionately smaller head, giving a subtly different silhouette. Flesh-footed shearwater is smaller and more slender still, and has pink legs, and a more slender pinkish bill with a dark tip.

Westland petrels breed under mostly coastal broadleaf forest of coastal ranges near Punakaiki, on the West Coast of the South Island. They are the most common large dark petrel found in Cook Strait, and northern South Island waters in winter, and are often seen from the Cook Strait ferry. During the March to November breeding season, Westland petrels range over shelf waters (<800 m water depth) of the South Island, Cook Strait, and on the Chatham Rise and south to seas around Stewart Island and Fiordland. They are rare north of Cape Egmont and East Cape. A few adults and juveniles are regularly seen off the eastern Australian coast.

Most of the population migrates to western South America in the non-breeding season (austral summer), with some rounding Cape Horn to occur off Argentina; a few may remain in New Zealand waters year-round. Banding recoveries show that juvenile birds occur mostly off southern Peru south to central Chile during their pre-breeding years, whereas adults fly directly towards southern Chile and the Cape Horn area, where they moult.

Westland petrels are confined to a single breeding location (coastal ranges near Punakaiki), where an estimated 4,000 pairs breed annually.

The Westland petrel is considered to be stable in numbers, although there is a long history of mortality caused by fisheries. They regularly follow fishing vessels, and are agile divers. In New Zealand waters, Westland petrels have been killed by both tuna longline and trawl fisheries, with females caught more frequently than males. The high degree of overlap of the range of Westland petrels with fisheries indicates that fishery mortality may be underestimated, and they have been ranked among the 10 most likely species to suffer adverse effects of fishing mortality in New Zealand commercial fisheries. Both immatures and adults may also be caught by South American fishing vessels, especially longliners, although there is limited data on this.

Threats also occur on land, with predation by dogs, cats and weka recorded at the breeding colony. Despite the continual presence of ship rats and stoats, there is no strong evidence of small mammals taking Westland petrel eggs, chicks or adults.

Adult Westland petrels flying to and from the breeding colony occasionally collide with power lines, and grounding of adults and fledglings around exposed lights has been recorded by the Department of Conservation. The extent of such mortality associated with built structures remains unreported.

Westland petrels form long-term monogamous pair bonds, with shared incubation and chick-care. The single large (81 x 56 mm) white egg is laid in May or June (peak 23 May) at the end of a 1-2 m long burrow. Incubation takes 57-68 days, with eggs hatching in the last half of July. Chicks are fed by regurgitation, and fledge between early November and mid-January (peak 20 November). Westland petrels can breed from 5-years-old, but 10 years is typical; they may live for more than 37 years.

Westland petrels are solitary at sea when feeding on natural foods, but may feed in mixed flocks when attending fishing vessels to feed on fisheries waste. They feed by surface-seizing and diving.

Breeding Westland petrels consume mainly fish (especially lantern fishes), with a strong component of fisheries waste. Fishing activity within the foraging range includes middle-depth trawl fisheries, for example for hoki and hake, as well as longlining for tuna and ling.

A large all-dark petrel with a chunky large-bodied appearance and a stout pale yellow bill with a dark tip. The plumage is entirely dark brownish-black, apart from odd white feathers evident in a few individuals, and the legs and feet are black.

Calls from birds in burrow, followed by distress calls