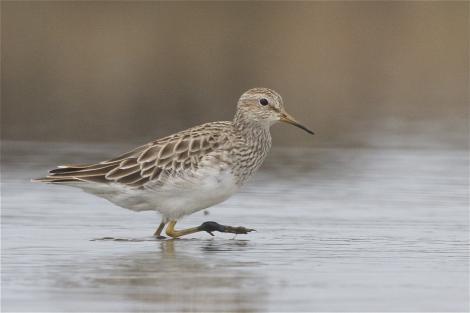 The pectoral sandpiper is a medium-small migratory wader, slightly larger than the sharp-tailed sandpiper, with which it often associates in New Zealand. Males are markedly larger than females, and can weigh up to 50% more.

Pectoral sandpipers are rare migrants to New Zealand, with 10-20 birds observed each year. They may be seen at estuaries, rivermouths and on the margins of lowland lakes.

The pectoral sandpiper is a medium-small plump-bellied wader with a relatively long neck and a short, weakly down-curved bill. The neck and breast are streaked brown, there being a distinctive strong demarcation between the streaked area and the white belly. The back and upper forewings are scaled brown grey. The outer upper wings and trailing edges are dark brown or black. There is a faint white wing bar. The axillaries are white and the outer underwing grey. The tail is dark with two white oval patches on either side of the rump. The crown is brown and there is a white supercilium, which may be faint in non-breeding plumage. Males are up to 50% heavier and have 10% longer wings than females. The bill is distinctly two-toned, paler at the base; the legs are of medium length and yellowish.

Similar species: sharp-tailed sandpiper has a rufous crown, a more prominent white supercilium and white eye-rings. Ruff is larger, has a more prominent white wing bar, larger white oval patches on the uppertail, and there is no strong demarcation between the white belly and brown breast. Cox’s sandpiper (hybrid, male pectoral x female curlew sandpiper) has a longer darker bill, darker grey or olive legs, a less distinct supercilium and more white on sides of the tail.

The pectoral sandpiper breeds in northern North America and Siberia, and migrates (from late June) to South America and to a lesser extent Australasia.

The first (and so far only) record of a Cox's sandpiper in New Zealand was a bird at Lake Ellesmere from November 2016 to February 2017.

Pectoral sandpipers breed in Arctic tundra in June/July. Males are much larger than females, and have an inflatable throat sac which expands and contracts during display flights, while they produce an unusual hooting sound. They are promiscuous and polygynous, with the male taking no part in incubation or check-rearing. The nest is a shallow depression lined with fragments of vegetation; the clutch of 4 eggs hatch after 21-23 days of incubation. Chicks leave the nest and feed themselves within hours of hatching, and are attended by the female for at least 10 days. Occasionally males breed with female curlew sandpipers, producing Cox’s sandpiper (named as 'Calidris paramelonotus' in 1982, before the hybrid origin of the birds was confirmed genetically).

Pectoral sandpipers may be found with or without other waders, in particular sharp-tailed sandpipers, in coastal areas. They may occur singly or in a small group of 2-5 birds.

Pectoral sandpipers feed in grass or mud away from the water’s edge, consuming insects, crustaceans and seeds. Food is found by sight or by probing. While feeding, they move steadily with rapid pecks and probes.

A medium-small plump-bellied wader with a relatively long neck, brown crown, white eye stripes, a short weakly down-curved bill, and medium-length mustard yellow legs. The neck and breast are streaked brown creating a strong demarcation with the white belly, the back and upper forewings are scaled brown grey, and the tail is dark with two white oval patches on either side of the rump.