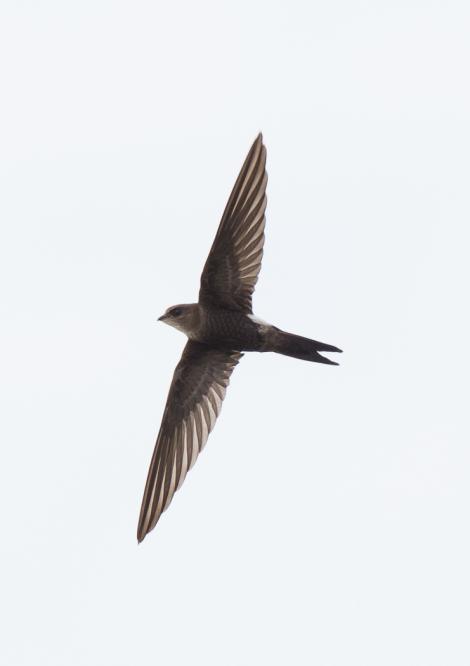 Swifts are fast flying birds that spend most of the year on the wing, only landing during the breeding season. Their legs are so short and their wings so long that they are unable to take off if they are placed on the ground. They have wide mouths that are used to feed on ‘aerial plankton’.

The fork-tailed swift is a ‘typical’ swift with scimitar shaped wings and mostly blackish plumage. The rump is white and the throat and upper breast pale grey; the tail is deeply forked.

Fork-tailed swifts breed across much of east and South-east Asia, and are widespread in Australia in the non-breeding season. They spend most of the year relatively high in the air column, only coming down to near ground level at times of bad weather.

Fork-tailed swifts have been recorded from both main islands, as well as Antipodes and Campbell Islands, with about 20 records in total (a maximum of 4 birds at one time). A. p. pacificus, which is the northernmost population breeding in Japan and northern China, is the race that spends the non-breeding season in New Guinea and Australia and strays to New Zealand. There are no estimates of population size, but flocks of up to 50-90,000 have been recorded in Australia.

None known, however it is likely that populations of prey species have been and are being affected by pesticide use and air pollution, which remain serious problems in much of east Asia, as well as global climate change.

Fork-tailed swifts nest in colonies on cliffs. A clutch of 2-3 eggs is laid in a nest of grass and other vegetation glued together with saliva.

A ‘typical’ swift species with scimitar shaped wings in flight and mostly blackish plumage. The rump is white and the throat and upper breast pale grey; the tail is deeply forked.

Birds in flight, hawking for insects