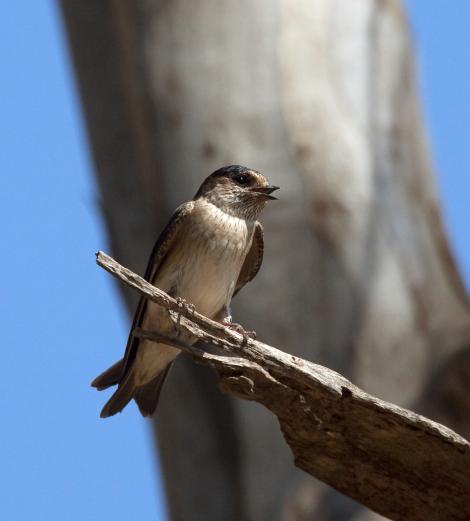 The tree martin is a medium-sized sombre-plumaged swallow that occasionally reaches New Zealand from Australia. They can be found in a variety of habitats, particularly wetlands, often associating with welcome swallows. Tree martins breed in eastern Australia, but are widespread throughout the continent, and found in New Guinea, the Solomon Islands and New Caledonia. Vagrants also reach some of New Zealand’s outlying island groups.

The tree martin is a medium-small swallow with a short bill and a short tail that is slightly forked when closed, but square when open. The long wings extend slightly past the tip of the tail when perched. The head and upperbody are blue-black, with a reddish forehead and a large dull white patch on the rump. The underparts are pale. The sexes are alike.

Voice: a fairly constant twittering, with throaty chirping when leaving the roost.

Similar species: welcome swallow is larger, lacks the pale rump, has a deeply-forked tail, and has rufous on the cheeks and throat. The fairy martin is slightly smaller and very similar to the tree martin, but has rufous-orange from the bill over the crown to the nape (this is confined to the forehead in the tree martin).

Tree martins breed in eastern Australia, and migrate to northern Queensland, New Guinea and the Solomon Islands. They are vagrant to New Caledonia and New Zealand. Tree martins are found in a variety of open-country habitats, including built-up areas, however, wetland are especially common. Most New Zealand records are from wetland areas, estuaries and rivermouths.

Tree martin specimens were collected from Cape Farewell (March 1856), and Grovetown, Blenheim (March, 1883). There are about 50 accepted sightings throughout New Zealand, including multiple sightings at Farewell Spit. They have also been recorded from the Snares Islands (February 1969, August-October 1982, February 1984, December 2014, March 2015) and Chatham Island (November 1988).

Outside of the breeding season in Australia the tree martin is typically observed in flocks of twenty to thirty, but sometimes in flocks numbering in the hundreds. They sometimes breed in colonies, nesting in mud-lined holes in trees, cliffs and buildings. Tree martins often migrate in large or mixed species flocks, with fairy martins and welcome swallows. Their flight pattern is similar to that of the fairy martin, with rapid accelerations.

Like other swallows, tree martins feed almost entirely on flying insects caught while in flight. They occasionally take prey from the water surface.

A small songbird species with a short bill, short square tail, wings that extend slightly past the tip of the tail when perched, blue-black head and upperbody, a small reddish forehead patch, pale underparts and a large dull white patch on the rump. The sexes are alike.