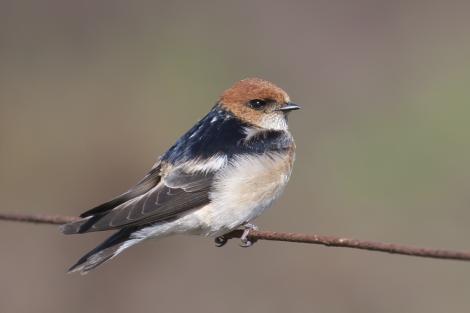 The fairy martin is a small swallow with a short, slightly square, tail and long, broad wings with pointed tips that extend slightly past the tail when perched. They are dull dark blue on the back and upperwings, with a prominent off-white rump and pale chestnut head. In flight, the wings are shorter than those of most other swallows. The sexes are alike.

Similar species: similar to the tree martin (also vagrant in New Zealand), the fairy martin is slightly smaller with a less pronounced fork of the tail, and has pale rufous extending from the forehead across the crown to the nape (cf. on forehead only for tree martin). Welcome swallow is larger, longer winged, with a long, deeply-forked tail, and dark blue-black on the crown and nape.

In Australia, fairy martins nest in colonies, building their distinctive tubular mud nests against buildings, in caves and on cliffs. They are not territorial, and can form large flocks, particularly when roosting or during migration. Fairy martins tend to fly low to the ground, with rapid wing beats, and are highly agile.

Fairy martins feed on insects, taken in the air by sallying at variable heights, with rare records of feeding on the ground. Often feeds with other species, such as the welcome swallow. No New Zealand data.

A small songbird species with a slightly square short tail, long broad wings with pointed tips that extend slightly past the tail when perched, dull dark blue back and upperwings, off-white rump and belly, and a pale chestnut head. In flight, the wings are shorter than those of most other swallows; the sexes are alike.