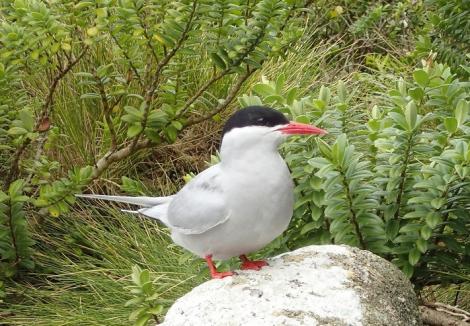 The Antarctic tern is the most frequently observed tern around New Zealand’s subantarctic islands. Unlike its northern counterpart, the Arctic tern, New Zealand Antarctic terns do not undertake spectacular migrations after breeding, but is likely to remain close to the breeding islands all year. When feeding on shoals of small fish or swarms of crustaceans they may form flocks of up to 100 birds.

The same species is widely distributed around subantarctic islands of the southern hemisphere, as well as exposed rocky areas of the Antarctic mainland. The more southern populations migrate northwards after breeding e.g., those Antarctic terns that breed on the Kerguelen archipelago overwinter in southern Africa.

The Antarctic tern is a medium-sized tern with a white rump and forked tail. In breeding plumage adults have a black cap down to a bright red bill, with white cheeks, an even grey body, and wings with black only on the outer edge of the outer primary; the legs are red. In non-breeding plumage the black cap recedes to just behind the eyes, the underparts become white and the bill becomes dull reddish-black. Juveniles initially are marked buff, grey and white on the back, with markedly buff flanks; the bill is dull black and the legs are dull red.

Voice: “trr-trr-kriah” is the main call when in flight and fishing. A “chrrrr” is given when defending its nest against intruders, and a high-pitched call is used to summon their mate

Antarctic terns can co-occur with white-fronted terns at The Snares, Auckland  and Campbell Islands. The latter are larger, paler, and have a longer, fine, black bill than Antarctic terns in any plumage.

Antarctic terns breed at all New Zealand subantarctic islands, plus on some of the muttonbird islands off southern Stewart Island. During the breeding season (September-April) Antarctic terns do not range far at sea, and so are usually seen within 2 km of the breeding islands. At the northern breeding sites (islands off Stewart Island, The Snares), adults and young usually stay in nearby coastal waters, but farther south they tend to be absent April-October. They are assumed to be out in the southern ocean, as Antarctic terns have not been recorded north of Foveaux Strait.

An estimated 1000 breeding pairs, but no systematic surveys completed except at The Snares where a minimum of 65 breeding pairs were present during the 1980s.

Antarctic terns are usually colonial breeders, although they may also nest as isolated pairs or small groups. Nests may be on bare rocky or gravel areas, or among light vegetation such as tussock or small Hebe. The laying season is prolonged and varies from island to island. For example, it is September-March at The Snares, October-March at Campbell Island, December-March at the Antipodes, and November-February at the Auckland Islands. The nest is a shallow scrape or depression, usually lined with flattened vegetation. The clutch size is typically 1-2. Both members of the pair incubate the eggs and feed the young.

Antarctic terns feed close inshore, either singly or in flocks, catching prey by contact dipping (i.e. submerging the bill whilst flying) or plunge diving to become completely submerged. Single birds may defend a feeding area, chasing off conspecifics whilst uttering a loud “chrrrrrr”. During the breeding season they defend the nest site against any intruders by repeated dive bombing, occasionally striking them with their sharp bill. After the breeding season, Antarctic terns tend to form flocks at well-established roosts on rocky promontories adjacent to the sea. The age of first breeding is 3 years and with an estimated annual survival of 94% the average life-span is 17 years, with the oldest birds surviving over 30 years.

Sagar, P.M. 1991. Aspects of the breeding and feeding of Kerguelen and Antarctic terns at the Kerguelen Islands. Notornis 38: 191-198.

A medium-sized tern with a white rump and forked tail. In breeding plumage adults have a black cap down to a bright red bill, with white cheeks, an even grey body, and wings with black only on the outer edge of the outer primary; the legs are red; non-breeding adults have a black cap that recedes to behind the eyes, the underparts become white and the bill becomes dull reddish-black.

Mobbing calls of adults near nests on cliff

Mobbing calls of adults near nests on cliff