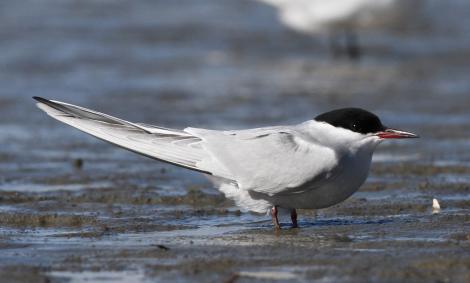 Arctic terns are one of the world’s great migrants, each year journeying from the Arctic to the Antarctic region and back. Some fly more than 80,000 km each year. As they may live for more than 30 years, the total distance travelled in their lifetime may exceed 2.4 million km, which is equivalent to three return journeys to the moon! This marine species is very rare in New Zealand and easily confused with some other tern species in the region but it can be distinguished when seen closely. It was first recorded in New Zealand in 1929.

The Arctic tern is a small to medium-sized tern with distinct breeding and non-breeding plumages. They are light grey above with a contrasting white rump, very short red or black legs, a short bill, and a deeply forked tail. Dark outer flight feathers contrast with the paler inner wing. Birds in breeding plumage have grey under parts and black caps extending over their napes and crowns to the bases of their bills, which are red. Non-breeding birds have white undersides, black bills, a variable dark bar on the upperwing, and their black caps recede to behind their eyes, leaving a black band from the eye to the nape. Juveniles resemble adults in non-breeding plumage but may have brown barring on some of their dorsal feathers.

Similar species: Arctic terns are easily confused with other medium-sized tern species, but differ in usually having distinctly shorter legs. New Zealand’s abundant white-fronted tern is slightly larger in all dimensions and, in breeding plumage, its black cap never extends to the base of its bill. The vagrant common tern is also a slightly larger bird with a more robust bill. Common terns (in New Zealand) and white-fronted terns never have red bills. Antarctic terns are extremely similar to Arctic terns but are confined to the very south of the New Zealand region. The breeding/non-breeding plumage cycle of the Antarctic tern is the opposite of that for Arctic tern, they have relatively longer legs, and have less black on the outer wing.

Arctic terns nest in Arctic and subarctic regions and annually migrate to and from the Antarctic, where they mainly feed near the edge of the pack-ice. Adults begin migration south from July to October along three known migration routes (eastern Pacific; western and eastern Atlantic); northern migration routes (from March-May) are over deeper waters. Arctic terns are mainly pelagic in the southern hemisphere, living out of sight of land. In New Zealand they are most often seen roosting with white-fronted terns on beaches or at river mouths.

The Arctic tern is rarely seen in New Zealand, but is probably an annual migrant in low numbers. They are most commonly seen on their southern migration in November, but records span September to June. Most records have been of single birds, however small flocks of up to four birds have been reported. A chick banded in 27 June 2003 in Sweden was recovered dead on Stewart Island on 1 December 2003.

Arctic terns are gregarious, and in New Zealand they are most often seen roosting among flocks of white-fronted terns.

Feeding Arctic terns normally hover and plunge, catching prey from just below the surface. They mainly eat small fish, but there are no data from New Zealand.

A medium-sized tern with pale grey upperparts and breast, white rump, short legs, short bill, and deeply forked tail. Birds in breeding plumage have grey underparts and a black cap extending over the nape and crown to the base of the red bill; non-breeding adults have white undersides, black bills, and a black band from the eye to the nape.