Geographical variation: Three subspecies, australis in Australia and New Zealand, cristatus in the Palearctic and infuscatus in Africa. 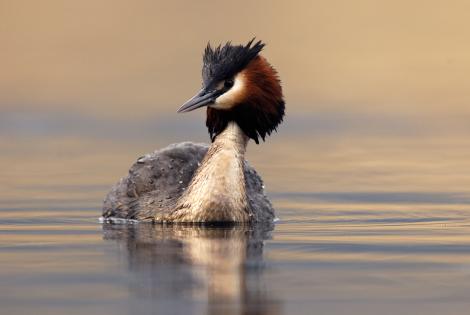 The Australasian crested grebe is majestic and distinctive diving bird that is usually seen on the southern lakes of New Zealand where it breeds. It has a slender neck, sharp black bill and head with a distinctive black double crest and bright chestnut and black cheek frills, which it uses in its complex and bizarre mating displays. It is unusual for the way it carries its young on its back when swimming. The crested grebe belongs to an ancient order of diving water birds found on every continent in the world. They are rarely seen on land except when they clamber onto their nests on the lake shore. The Australasian crested grebe occurs in New Zealand and Australia but it is threatened in both countries and the New Zealand population probably numbers fewer than 1000 birds.

Crested grebes are moderate sized water birds that may be mistaken for waterfowl or shags at a distance. Both sexes have a long, slender neck, fine black bill and head with a distinctive black double crest and bright chestnut and black cheek frills. The upper plumage is a dark chestnut-brown, the under parts silvery white, and the wings have a distinctive white patches that are only seen in flight. Females generally have more white above the eye, a shorter bill, a slimmer neck, and smaller cheek frills. Unlike birds in Europe, Australasian crested grebes appear to retain full breeding plumage throughout the year; duller birds without crests are probably young of the year. The feet have a peculiar lobed structure and are set relatively far back on the body – a design to increase the efficiency and speed of diving. The head and neck of the young are striped black-and-white and the body plumage is grey.

Voice: a range of loud growling, grunting and barking calls that travel far across water.

Similar species: the other New Zealand grebes (dabchick, Australasian little grebe and hoary-headed grebe) are all very small in comparison and lack the head crests and tippets. At a distance could be confused with black or little shags, which have a similar silhouette and diving behaviour.

Crested grebes occur throughout Europe and central Asia, Africa, southern Australia and New Zealand. They also winter in parts of southern Asia. In New Zealand, crested grebes occur widely in the South Island but are extinct in the North Island (although occasional birds are seen there). They occur on up to 100 lakes from small tarns to large glacial lakes, with their strong holds in the Canterbury and Otago high country. They are rarer and have declined significantly in Nelson, Marlborough, West Coast and Fiordland, but have recently began nesting on the coast in Canterbury, where their numbers are increasing. They forage in a variety of shallow lakes, but require lakes fringed with rushes, sedges, reeds or willows to nest.

In New Zealand, crested grebes are threatened because of predation by introduced mammals such as stoats and ferrets, loss of shore-line nesting habitat, the establishment of hydro-electric power schemes and disturbance by power boating and perhaps other recreational activities on lakes. Competition with introduced fish may have been a factor causing early declines. Some predator control has been initiated around lakes in order to improve nesting success. Artificial nesting platforms have been used with great success to establish a population at Lake Wanaka.

Nesting occurs between September and March. The nest is generally made of sticks and waterweeds and floats on the water, but is often attached to willow branches or reeds. The female lays 5-7 eggs that are covered with weed when not being incubated. Both sexes incubate and they both care for the young, which are often carried on the back when small.

Some crested grebes migrate locally in winter, moving from small lakes when they freeze to larger ones or moving from the high country to coastal Canterbury. They are renown for their highly ritualised courtship displays such as head shaking that shows their head crests off well, the ‘weed dance’ where they dive and offer each other water weed, the ‘ghostly penguin’ where they rise chest to chest while ‘walking’ on water and the growling ‘cat display’.

A relatively large diving bird with slender neck, sharp black bill and a head with a distinctive black double crest and bright chestnut and black cheek frills. It carries its young on its back when swimming.

Pair at nest under overhanging willows

Calls from pair on nest

Calls of juvenile and altercation between two adults