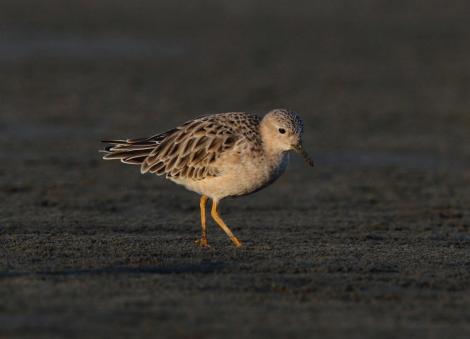 This striking buff-apricot sandpiper breeds annually during the northern summer on the high Arctic tundra in North America and Siberia, and is one of around 40 Arctic breeding migratory wading bird species known to reach New Zealand. It is the only species in the genus Tryngites, and the only North American wader species with a lek breeding system. It typically migrates to South America in the non-breeding season, but has reached Australia several times. There is a single accepted record from New Zealand, from the Kaipara Harbour in March 2014.

The buff-breasted sandpiper is a small wader with an erect stance, buff-apricot face, nape and breast, pale creamy throat, finely-streaked dark crown, large dark eyes, short dark straight bill, brownish-black scaly-patterned back and upperwings, white underwings, and long yellow legs. At rest the wing tips are level with the tail tip. The sexes are alike. Juvenile birds have black-centred scaly patterning on the back and dark spots on each side of the buff breast.

Similar species: Juvenile ruff is also buff-apricot but taller with a longer darker bill, smaller eyes with a small dark stripe behind each, and a well-defined white undertail. Upland sandpiper is taller and slimmer with a longer neck, a dark-tipped yellow bill and finely barred underwings. Little whimbrel has a decurved bill and dark legs. Pacific golden plover is larger with a thicker, darker bill, and pale grey underwings.

This high Arctic tundra breeding wader species is a very rare vagrant to Australasia. On its Arctic breeding grounds it prefers well drained sloping tundra with tussocks and light vegetation. On migration it favours dry grasslands and winters on pampas grasslands in Argentina. It is more likely to be seen on short turf or saltmarsh than on mudflats.

Buff-breasted sandpipers breed on high Arctic tundra on the coasts of Alaska and northern Canada, and Wrangel Island and west Chukotka in Siberia.

The only accepted New Zealand record was of a single bird at Waionui Inlet, southern Kaipara Harbour, in March 2014. There are more than 30 records of this species from Australia.

After rapidly declining to reported near extinction due to severe overhunting in the early 1900s its moderately small remaining population continues to shrink. This decline is thought to be caused by habitat loss and degradation on both its breeding and wintering grounds. It is classified as Near-Threatened on the IUCN Red List.

The buff-breasted sandpiper is the only species in the genus Tryngites, and the only North American wading bird species with a lek breeding system. In the northern spring, males gather at display grounds where they lift one or both wings to expose the white underwing to females. They are long-distance migrants, migrating south via the Greater and Lesser Antilles in the Caribbean Sea to wintering grounds in south-eastern South America.

Diet consists of worms, aquatic insects and larvae, and seeds.