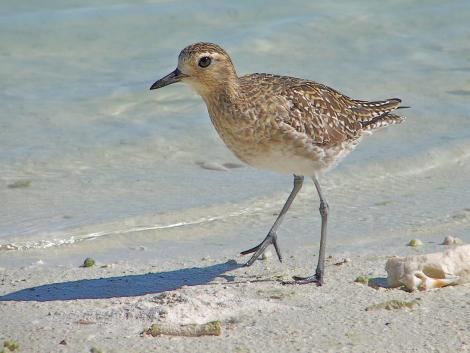 This beautiful gold-spangled plover breeds annually on the Arctic tundra of Siberia and Alaska. It is one of around 40 Arctic breeding wading bird species that migrate south to Australasia and Oceania, some of which fly over the Pacific Ocean and spend the austral summer in New Zealand. They fly in "V" formation flocks non-stop from Alaska to Hawaii, and then onwards to other Pacific Islands including New Caledonia and Fiji, some continuing on to New Zealand. Pacific golden plovers have been recorded as far south as New Zealand's subantarctic islands, and are the fourth commonest Arctic migrant wader in New Zealand. Breeding adults have striking black-and-white plumage spangled with gold on the back and upper wings, hence the common name. Breeding plumage develops towards the end of the austral summer before the return migration to the Arctic breeding grounds via the East Asian-Australasian flyway. The annual migration 'round trip' is 25,000 - 27,000 km.

The Pacific golden plover is a medium-sized, long-legged plover with large head and large dark eyes. Adult birds in breeding plumage have black running from the face down the throat and the belly to the underparts and flanks. The black is bordered with white, with black speckling along the white border by the underparts and undertail. The crown, nape, back, upperwings and upper tail are densely spangled with gold, black and white. Birds in post-breeding moult or developing breeding plumage go through gradual variations of colour and marking, which can make identification confusing. The black breast becomes buff-apricot with dark speckling during moult. The buff-apricot wash and dark speckling darkens to black as breeding plumage develops. Adult non-breeding birds have a buff-apricot wash with dark speckling on the breast and dark patches in front of the eyes and a faint ear patch. The sexes are alike. Juvenile birds have more dark speckling on the upperparts, breast and flanks, and a yellower head and breast.

Voice: the song of the Pacific golden plover is a series of slow, slurred whistles punctuated with pauses. The flight call is a clear melodious two-syllable tlu-ee with accent on the second syllable.

Similar species: the three golden plover species (Pacific, American and European) are all very similar. The only other one that reaches New Zealand (very rarely) is the American, which is slightly larger, heavier and longer-winged than the slightly longer-legged Pacific. In breeding plumage, the American has all black underparts and flanks, bordered with pure white down to the lower breast. The Pacific has black underparts and flanks bordered with white all around, but with black speckling along the border from the breast to the undertail. In non-breeding plumage, the American golden plover has a grey wash all over (buff-apricot wash in Pacific golden plover), and a more prominent pale eyebrow stripe, making the bird appear ‘capped’. When standing, the wing tips of the American golden plover project beyond the end of the tail, whereas the Pacific golden plover's wing tips are level with the tail. Grey plover is larger and bulkier, with greyer plumage, black ‘armpits’, and a white rump and partial wingbar.

The Pacific golden plover breeds on Arctic tundra in coastal Siberia and Alaska, mainly north of 60° N. They migrate south in August-September on a broad front, heading to southern hemisphere coasts, including Australia, the Pacific Islands and New Zealand. They arrive in New Zealand September-November and depart northwards late March-early April. In New Zealand, Pacific golden plovers usually occur as small flocks of 10-50 birds at harbours and estuaries, plus some lowland lakes. They are widespread in New Zealand with regular sites in summer including: Parengarenga, Rangaunu, Whangarei, Kaipara and Manukau Harbours, the Firth of Thames, Bay of Plenty, Wairoa, Ahuriri, Manawatu, Muriwai (Gisborne), Lakes Ohia, Wairarapa and Ellesmere, Farewell Spit, and Southland estuaries and lagoons. Pacific golden plovers are regularly recorded at the Chatham Islands (Te Whanga Lagoon) and Kermadec Islands, and once at the Auckland Islands (March 1982).

Pacific golden plover occur on grassland, saltmarsh and upper levels of tidal mudflats. They roost in Sarcocornia saltmarsh along estuaries, or in ploughed fields or short grass.

The total global population of Pacific golden plover is estimated to be 190,000 - 250,000 individuals with 300-1200 birds migrating to New Zealand each summer, and very few overwintering.

Pacific golden plover breed in the Arctic on shrub tundra and montane tundra. The nest is a shallow lichen-lined scrape on a dry site among lichen or moss. Breeding birds arrive May-June. They are monogamous and share incubation. The 4 white-buff eggs, spotted and splotched with brown and black, are laid in June, and hatch after c.26 days. Chicks are cared for by both parents, or the male only if the brood is late. Birds depart on migration August-September, with non-breeding birds departing 2-4 weeks earlier. The oldest banded bird recorded was 6 years old.

Pacific golden plovers are strongly migratory, flying in "V" formation flocks. They feed in short vegetation or on open tidal mudflats. When foraging on mudflats, they walk in rapid short bursts, stopping regularly to survey immediate area, often tilting the head sideways and freezing to watch a patch of mud. When the bird sees sign of prey it repeatedly pecks and probes mud, and digs up the food item. It hunts prey by sight, hence the large eyes.

A medium-sized plover with short dark bill and long dark legs. Adults in breeding plumage have black running from the face down the throat and belly to the underparts and flanks, with the crown, nape, and upperparts densely spangled with gold, black and white. Non-breeding birds have a buff-apricot wash with dark speckling on the breast and dark patches in front of the eyes and an ear patch.