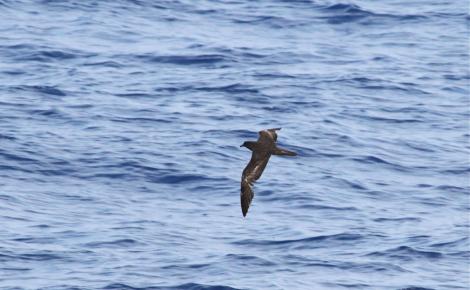 Every year thousands of kilometres of beach are covered by amateur ornithologists looking for the corpses of seabirds washed ashore. This macabre task is the easiest way to gain an understanding of the seabirds using New Zealand waters, and every so often someone finds a strikingly rare species. One of these was Bulwer’s petrel, a freshly dead specimen of which was found on Te Horo Beach, Horowhenua, in January 1998. This is the only New Zealand record to date.

Bulwer’s petrel is a small, sooty-brown petrel, about the size of a prion, but with quite a different shape. It has a long, tapering tail and relatively long, narrow, pointed wings held forward at the carpel joint. Lighter-brown edges to the secondary wing coverts form a pale diagonal band across the upper wing, a feature that is more apparent in good light. The tail looks pointed in normal flight, but is wedge-shaped, a feature only seen clearly when the bird banks and spreads its tail. It has a moderate-sized, smooth black bill with pronounced tubular nostrils. The legs are blackish-pink with dark webs; the iris is dark brown. The flight of Bulwer’s petrel is rapid, buoyant and erratic, somewhat bat-like, with loose, wristy, wing-beats. Individuals usually fly close to the sea-surface, especially in strong winds, with short bursts of flapping, while twisting from side to side, interspersed with short, fast glides and quick changes in direction.

Voice: Bulwer’s petrel on their breeding grounds give a deep, chuffing coq coq coq call, about 13-14 notes given in a 10-second period, mixed with occasional double coq-coq notes. They are silent at sea.

Similar species: this extremely rare vagrant to New Zealand waters is one of several wholly dark-brown or sooty-brown petrels and shearwaters that are easily confused, even by experts, when observed at sea. Observers are forced to rely on subtle differences in the birds’ flight behaviour and body shape. Bulwer’s petrels differ from smaller storm petrels by seldom skimming and pattering the sea-surface, and from slightly larger, dark gadfly petrels, e.g. Kerguelen petrel, by having a distinctly longer tail and by flying close to the sea-surface rather than in high up-and-down arcs. Other dark petrels and shearwaters in New Zealand seas, such as black petrel and sooty, short-tailed, and flesh-footed shearwaters, are all distinctly larger and have proportionately shorter tails. In warmer waters around northern New Zealand beware of both wedge-tailed shearwaters which also has a long pointed tail but is much larger with proportionately bigger and more pointed wings, and the similar-sized brown noddy, especially at a distance. The long bill of the brown noddy makes the head look pointed; its flight is also slower and more relaxed.

Bulwer’s petrel is a widely-distributed pan-tropical species outside its mid-year breeding season, with vagrants occurring both north and south of its normal off-season range, including in north-west Australia, the Tasman Sea off Victoria, and one specimen from New Zealand. In the north Atlantic a small population of about 7000-8000 pairs breed on the Azores, Madeira, Canary and Cape Verde Islands. Much larger numbers breed in the north tropical Pacific on numerous islands and stacks along the Hawaiian archipelago (estimated population: 75,000-103,000 pairs) and on islands and islets of southern Japan and south-east China (estimated population on various islands here ranging from 100 to 10,000 pairs). An unknown number also breed on some islands and atolls in south tropical French Polynesia. A few pairs have been found recently nesting on Round Island in the central Indian Ocean and there is a suggestion that some might be breeding on St Helena in the South Atlantic. The species is poorly known outside its main breeding areas.

Only one record from New Zealand, a beach-wrecked bird found at Te Horo, north of Waikanae, on 8 January 1998. The specimen is lodged in the bird specimen collection at the Museum of New Zealand/Te Papa Tongarewa (registration number OR.025739).

On its breeding grounds, Bulwer’s petrel is nocturnal, nesting colonially in cavities under rocks or in other holes and crevices during the northern spring. Birds are moderately faithful both to their mate and nest site, about 80% returning to both. Outside the nesting season, birds migrate to tropical waters where they are generally solitary. Bulwer’s petrel does not usually follow ships.

Bulwer’s petrels consume squid and small fish, occasionally plankton, mostly taken from the sea-surface, although birds are known to make shallow dives down to just over 2 m. There are some suggestions that they feed on prey coming to the sea-surface at night, as the main known prey items are luminescent.

A small sooty-brown petrel with a long tapering tail that looks wedge-shaped and pointed in normal flight, long narrow pointed wings with lighter-brown edges to the secondary wing coverts forming a pale diagonal band across the upper wing, a black bill with pronounced tubular nostrils and blackish-pink legs. Its flight is rapid, buoyant, erratic and bat-like with loose wing-beats.