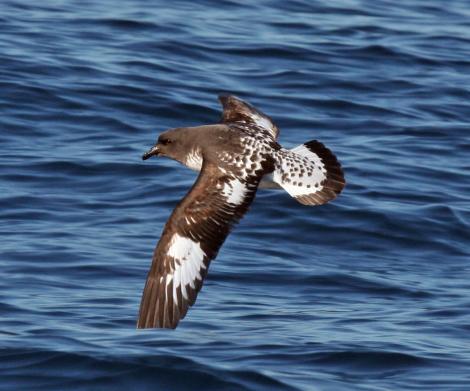 With their sharply contrasting black-and-white chequered plumage, Cape petrels are probably the most familiar and easily recognisable of New Zealand’s seabirds. They frequent New Zealand coastal waters, especially south from Cook Strait, and are familiar ship followers and scavengers around commercial fishing vessels.

The head, neck and mantle of the Cape petrel are black; the lower back, base of the upperwing and rump are white, heavily chequered with black, whilst the outer upperwings are black with broad white patches near the body and beyond the bend in the wing. The underparts are white; the underwings are also white, but with a black leading edge. The bill, legs and feet are black.

Voice: Cape petrels are noisy at sea when squabbling for food and at the nest, where they give cackling and chirring calls.

Similar species: The subspecies are separated by the extent of white on the upperparts. Snares Cape petrels have less white on the upperparts. They are only likely to be confused with Antarctic petrels, which have a similar strongly patterned plumage, but are clean-cut chocolate brown and white rather than the chequered and spotted black and white of the Cape petrel.

The majority of breeding sites are free from mammalian predators. Occasionally Cape petrels are reported as by-catch in longline and trawl fisheries.

Cape petrels breed in loose colonies. They are monogamous with shared incubation and chick care. The nest is a scrape lined with rock fritter obtained from the immediate vicinity of the nest. Pairs tend to return to the same site year after year. The single large (61 x 43 mm) white egg is laid in November. Incubation takes about 45 days; chicks are fed by regurgitation, fledge at about 52 days, and are independent at fledging.

Cape petrels are gregarious both at sea and when breeding. At sea, they may form large dense flocks, gathering for food around fishing vessels or swarms of crustaceans, where they are both noisy and quarrelsome. At their breeding colonies they use an elaborate series of displays and calls to maintain their pair bond and to defend their nest scrape. Cape petrels are annual breeders that usually return to the same nest site year after year with the same partner. Immediately after breeding the colonies are deserted as the birds undergo moult around the breeding islands. Afterwards they return to the breeding colonies during the day at least, spending increasing time ashore from July on. In the New Zealand region the longest interval between banding and recapture is 27 years.

Cape petrels mainly eat krill and amphipods, plus small fish and squid, and offal from fishing vessels taken from the surface. They rarely plunge or dive for food.

A medium-sized black-and-white petrel with a black head, neck and mantle, a white lower back, base of the upperwing and rump heavily chequered with black, and black bill, legs and feet. The outer upperwings are black with broad white patches near the body and beyond the bend in the wing; the underparts and underwings are white with a black leading edge to the wings.