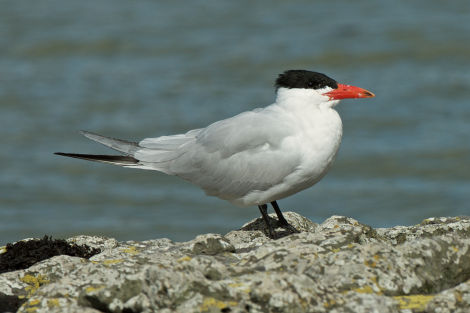 The Caspian tern is a large distinctive gull-like tern of shallow coastal waters and, particularly outside of the breeding season, inland lakes and rivers throughout New Zealand. It is an attractive sleek species whose guttural call is often heard before the bird is seen.

The Caspian tern is the largest of all species of terns. With its 1 metre wingspan, it is similar in size to a black-backed gull. Caspian terns are silver-grey above and white below, with dark wing tips. The tail is relatively short and only slightly forked compared to other terns. The large bill is mostly bright red in adults, becoming dark near the tip, with the extreme tip  yellowish (only apparent at close range). Adults have black legs and a black cap to below the eye during the breeding season. The cap becomes speckled with white and less sharply delineated at other times of the year. Juveniles have some brown mottling on the back that is lost during the first autumn moult, while the diffuse brown cap is retained for longer. The bill is orange and smaller than adults at first. The legs and feet may be dull orange or black. The flight of Caspian terns is direct, with purposeful shallow beats.

Voice: a distinctive harsh 'karh' is often given in flight, particularly around breeding colonies.

Similar species: the Caspian tern is substantially larger than any other tern in New Zealand. The next largest species, the crested tern (a rare vagrant) is half the size by weight, and has a yellow bill. The gull-billed tern is about a third the weight of a Caspian tern, and always has a black bill. Caspian terns are sometimes mistaken for large gulls by inexperienced observers.

Caspian terns are very widely distributed around the world. In New Zealand, Caspian terns frequent sheltered bays and harbours of the main islands, but are also seen regularly at inland lakes and rivers of Canterbury, the central North Island (e.g. Lake Taupo and Rotorua) and Waikato (e.g. Lake Ngaroto and Lake Whakamaru on the Waikato River). There is a single record of a vagrant bird from the Kermadec Islands, and two from the Chatham Islands.

Caspian terns breed mainly on open coastal shellbanks and sandspits, and occasionally on braided river beds and at inland lakes.

There is little evidence of Caspian terns in coastal deposits of subfossil bones in New Zealand, indicating that they may have colonised recently or had a very restricted distribution here until the early 20th century. Although widespread now, Caspian terns remain uncommon in New Zealand, with around 1300-1400 breeding pairs estimated.

Caspian terns are susceptible to nest disturbance by people, their dogs, and off-road vehicles. Southern black-backed gulls and red-billed gulls may attack eggs and chicks following disturbance by people. Like other shore-nesting birds, chicks and eggs are vulnerable to predation by introduced mammalian predators such as cats, stoats and ferrets.

Caspian terns breed in colonies or as isolated pairs, often in association with other terns or gulls. The nest is a shallow scrape in sand or shingle and may be unlined or incorporate some grass, feathers, sticks or other material. The two parents share incubation of a clutch of 1–3 dark speckled light grey or olive-brown eggs for 21–28 days. Eggs are laid from late September through to late December. Chicks are fed whole regurgitated fish by both parents. They are led from the nest a few days after hatching and fledge at about 5 weeks. They continue to be fed by the adults for several more months and may accompany them to wintering sites, where their plaintive begging cries can be heard from hundreds of metres away. Caspian terns first breed when 3-4 years old.

Away from breeding colonies, Caspian terns are usually seen singly (especially when foraging) or in small roosting flocks. Their usual hunting method is to fly up to 15 m above the surface of the water, then diving steeply on to prey, often becoming completely submerged in the process. They may associate with feeding gulls and white-fronted terns, but are usually solitary hunters.

Caspian terns feed mostly on small surface-swimming fish such as yellow-eyed mullet, piper, and smelt. Fish are caught by plunge-diving and usually swallowed in flight. They have also been recorded feeding on crickets and marine worms caught by probing in soft mud and wading in shallow water.

A very large heavily built tern, silver-grey above and white below, with dark wing tips, a large pointed bright red bill with dark tip, a relatively short slightly forked tail. Adults have black legs and a black cap to below the eye during the breeding season; the cap becomes speckled with white and less sharply delineated at other times of the year.

Calls in flight over breeding colony (white-fronted tern in background)