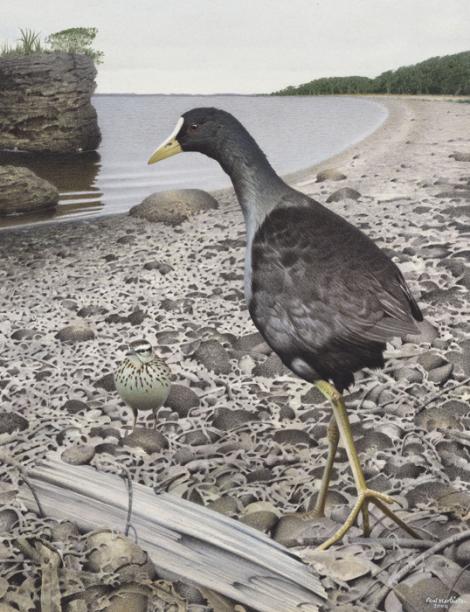 This large, extinct coot was first found in dune deposits on Chatham Island by Henry Forbes in 1892. Forbes’s type material is held in the Natural History Museum in London. Since then, numerous bones of this species have been found in dune sites and middens throughout Chatham Island, but the species may have been absent from other islands in the group. The Chatham Island coot was about twice the weight of extant coots, and was the largest coot known. Apart from a long neck and disproportionately long legs and toes, its skeletal proportions were similar to those of other coots, and so it was probably capable of flight. The presence of large salt glands above the eyes indicates that Chatham Island coots inhabited the brackish waters of the enormous (16,000 ha) Te Whanga Lagoon, probably in addition to a variety of freshwater and terrestrial habitats.

Differences between the Chatham Island coot and the slightly smaller New Zealand coot have been debated over the years. The most recent review by Trevor Worthy and Richard Holdaway recommended that both be considered as full species.

The Chatham Island coot became extinct in historic times because of over-hunting by man and possibly predation of eggs and chicks by the introduced Pacific rat. Its bones are common in middens as well as natural deposits, indicating that it was frequently taken for food.

A large extinct coot species with a long neck and disproportionately long legs and toes that was slightly larger than the extinct New Zealand coot. The Chatham Island coot was about twice the weight of the surviving Australian coot, which is a slate-grey species with a white bill and frontal shield, red eyes and large grey feet with lobed toes.