Geographical variation: Sometimes regarded as a subspecies of Fulica chathamensis 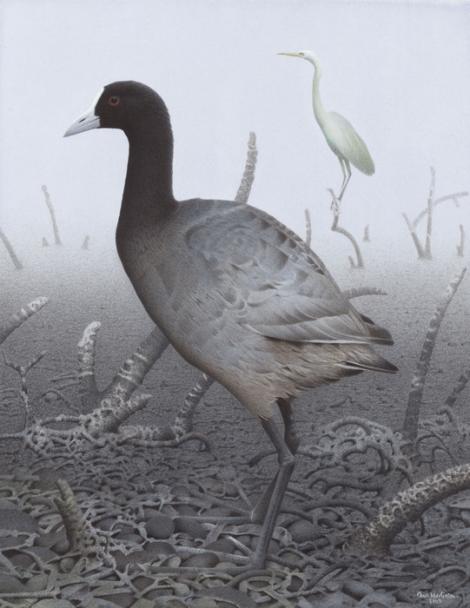 This large, extinct coot was first described from Southland but is now known from many sites in both the South and North Islands. Augustus Hamilton did not designate a holotype, basing the species on a syntype series carrying the letters CR (Castle Rock, Oreti River, the type locality) collected in 1892 and held by Te Papa. Storrs Olson subsequently designated a right humerus as the lectotype (registration number S.990).

Whether the New Zealand coot was diagnosably distinct from the slightly larger Chatham Island coot has been a matter of debate. Olson separated them as subspecies on the basis of a difference in the humerus, but Phil Millener thought this characteristic was unreliable and suggested that the two subspecies were separable by features of the sternum and tibiotarsus. Trevor Worthy and Richard Holdaway re-examined the fossil material, and recommended that the two be treated as separate species on the basis of cranial shape and proportional differences between various post-cranial skeletal elements.

The New Zealand coot became extinct in prehistoric times due to over-hunting by early Maori. Its bones are common in two archaeological middens in coastal Marlborough, where some coot bones were shaped into tools.

A large extinct coot species with a long neck and disproportionately long legs and toes. It was about twice the weight of the surviving Australian coot, which is a slate-grey species with a white bill and frontal shield, red eyes and large grey feet with lobed toes.