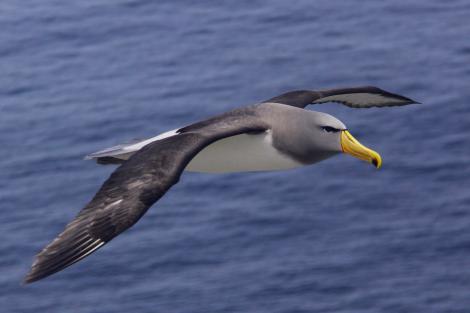 The Chatham Island mollymawk is a rare albatross with a restricted range. It is striking in appearance, with a dark grey head and bright yellow bill. Endemic to the Chatham Islands, the entire population breeds on The Pyramid, an isolated, almost inaccessible rock stack located south of Pitt Island in the South Pacific Ocean. Truly a pelagic species they spend most of their life at sea only returning to land to breed.

The Chatham Island mollymawk is an endemic medium-sized albatross from the Chatham Islands. Adults have a dark-grey head and neck, with white behind the eye and a thick black line in front of the eye extending towards the bill. The upperwings and back are blackish-brown, and the tail dark grey. The underparts and rump are white, and the underwings are white with a thin black edge (slightly thicker on leading edge) and a small black patch where the leading edge of the wing meets the body, and dark grey to black primaries. The bill is deep yellow with a black lower mandible tip. The legs and feet are light grey-flesh coloured. Immature Chatham Island mollymawks have a lighter grey head, variable amounts of grey on the underwing and undertail, and a yellowish-black bill with a black tip. Juveniles are similar to immature, but with a dark-grey bill with a black tip. Chicks have all light grey down and a black bill.

Voice: Chatham Island mollymawks are usually quiet at sea. They have a series of calls associated with breeding and territorial defence at colonies: bill clacking, harsh croaks and braying followed by aka aka aka calls.

Similar species: Adult Salvin’s mollymawks have a lighter grey head with a greyish-yellow bill (also with a dark tip to the lower mandible). Juveniles of Chatham Island, Salvin’s and Buller’s mollymawks are all similar, but are rarely seen in New Zealand waters, as all three migrate to seas off Chile and Peru after fledging. Buller’s mollymawk is smaller, with a less robust bill. Chatham Island mollymawk juveniles have the darkest ‘hood’, and generally show some yellow at the base of the bill.

The Chatham Island mollymawk has a stable annual population of about 5300 occupied nests on The Pyramid (based on surveys counting nest sites 1999-2010).

With only one breeding population, the Chatham Island mollymawk is vulnerable to severe storm events during the breeding season, which can affect breeding success and adult survival. Outside the breeding season such events can remove vegetation and the small amount of soil used for nest construction.

The Chatham Island mollymawk is currently listed as Naturally Uncommon by the New Zealand Department of Conservation and Vulnerable by the IUCN.

Chatham Island mollymawks breed in a single colony on The Pyramid, Chatham Islands. They are monogamous, annual breeders, with shared incubation and chick rearing. The single large (102 x 66 mm) whitish egg is laid on a nest pedestal, built of soil, guano, vegetation and occasionally bone that can reach up to 1m in height. Adults return to the colony in August, eggs are laid from mid September to late October, with incubation taking 68-72 days. Chicks hatch in November to December and fledge from March to May, when 120-140 days old.

Chatham Island mollymawks nests are built on rocky ledges and steep slopes, in close proximity, occupying almost all available space on The Pyramid. The steep slopes allow adults to land on or by their nest without disturbing other nesting birds. However, if intruders come too close to occupied nests the adults will act aggressively by biting, bill clacking or vomiting. Chicks respond to intruders by biting, bill clacking and regurgitating stomach oil.

The earliest juveniles return to The Pyramid aged four years, with first breeding at seven years of age, but predominantly later with a peak at eleven years.

Salvin’s mollymawks have also been recorded on The Pyramid, where they interact with Chatham Island mollymawks, with one mixed species pair recorded on a nest together, caring for a chick.

At sea Chatham Island mollymawks are generally solitary and don’t tend to follow ships. They form rafts up to several hundred individuals in washing flocks, offshore from The Pyramid.

Chatham Island mollymawks are generally surface feeders, but will shallow dive for food. They are known to feed on fish, squid and krill.

Robertson, C.J.R. 1991. Questions on the harvesting of toroa in the Chatham Islands. Science and Research Series No. 35, Department of Conservation, Wellington.

A medium-sized albatross with dark grey head and neck, white behind the eye, a thick black line in front of the eye extending toward the bright yellow bill, light grey-flesh coloured legs, blackish-brown upperwings and back, and dark grey tail. The underparts and rump are white, the underwings are white with a thin black edge and a small black patch where wing meets body.