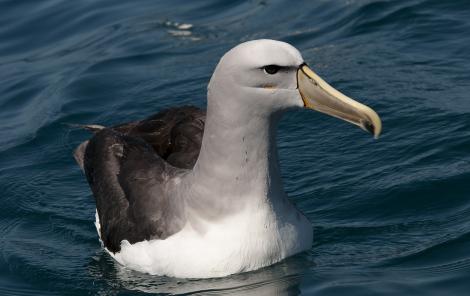 Salvin’s mollymawk was previously considered to be a subspecies of Diomedea cauta (Gould, 1841). However, following the transfer of D. cauta to the genus Thalassarche it was elevated to specific status. Salvin’s mollymawk frequents New Zealand coastal waters, especially south from Cook Strait and is a familiar albatross scavenging around commercial and recreational fishing vessels.

Salvin’s mollymawk is a typical medium-sized albatross. It is black across the upperwings, with a white lower back and rump and black tip to the tail. The underparts are white with narrow black borders under the wing and a small black notch in the “armpit” at the base of the leading edge of the wing. The head, throat and nape are pale grey, creating a hooded effect. The bill is grey-green, with a paler top and bottom and a black spot at the tip of the lower bill. Juveniles fledge with olive-brown bills with a dark tip, but apparently immediately depart New Zealand waters, and do not return until they have adult colouration.

Voice: Salvin’s mollymawks are usually silent at sea, though may give harsh croaking when squabbling for food. They utter a variety of brays, croaks and wails during courtship.

Similar species: White-capped and Chatham Island mollymawks are close relatives, but all are separated by the degree of grey on the head and the bill colour. White-capped mollymawk has a white head and neck, with a small black patch in front of the eyes and a grey wash on the cheeks. Its bill has grey-blue sides with yellowish top, bottom and tip. Chatham Island mollymawk is the darkest-faced of the three and has a bright yellow bill with a dark spot near the tip of the lower mandible. Juveniles of Buller’s and Salvin’s mollymawks are very similar, but both species fly across the Pacific Ocean to seas off Chile and Peru as soon as they fledge. Juvenile Buller’s mollymawks are smaller and slimmer, with less robust bills.

During the breeding season (August-April) Salvin’s mollymawks occur throughout coastal New Zealand, especially from Cook Strait south, and also across to south-east Australian waters. After breeding it migrates to seas off Peru and Chile and occurs as a vagrant in the South Atlantic. A small population of a few pairs was reported breeding on the Crozet Islands in the Indian Ocean.

All breeding sites are free from mammalian predators, although an expanding New Zealand fur seal population at the Bounty Islands may be affecting breeding success. Salvin’s mollymawk was the second most common albatross species observed killed in the New Zealand fisheries 1998-2004 with demersal longliners and trawling operations responsible for the majority of mortalities. The conservation status of this species was moved from nationally vulnerable to nationally critical in 2013.

Salvin’s mollymawk breed in large, densely packed colonies. They are monogamous with shared incubation and chick care. The nest is a pedestal of mud, guano and debris accumulated from the immediate vicinity, and used and added to year after year. The single large (104 x 67 mm) white egg is laid in August-September. Incubation takes 65-75 days; chicks fledge in February-April at about 115-130 days-old, and are independent at fledging.

As a typical albatross, Salvin’s mollymawks have perfected soaring flight. In strong winds they wheel effortlessly on their long, narrow, stiffly held wings. They use their webbed feet for swimming and as rudders when coming in to land. Their strongly hooked bills are used to grasp prey whilst the sharp edges of the upper mandible are used to slice it into manageable portions. However, albatrosses have a great capacity to extend the throat, and so can swallow large pieces of food.

At their breeding colonies Salvin’s mollymawks use an elaborate series of displays and calls to maintain their pair bond and to defend their nest pedestal. Salvin’s mollymawks are annual breeders that usually return to the same nest site year after year with the same partner.  After breeding the colonies are deserted and the birds migrate across the Pacific to seas off Chile and Peru. Banding shows that about 97% of adults survive from one year to the next, and so oldest birds would live for over 30 years.

A medium-sized albatross with pale grey head, throat and nape, black across the upperwings, white lower back and rump, black-tipped white tail, and a grey-green bill with paler top and bottom and a black spot at the tip of the lower bill. Adults have white underparts, narrow black borders under the wing, and a small black notch in the “armpit” at the base of the leading edge of the wing.

Adults at colony (erect-crested penguins and fulmar prions in background)