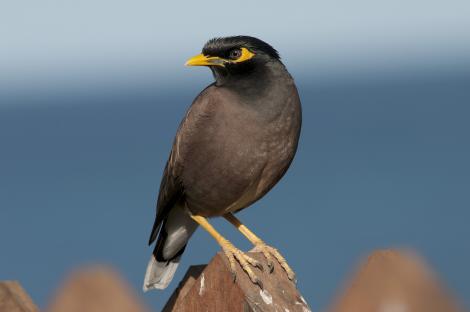 The common myna is a native of India, east and west Pakistan and Burma. It was introduced to many Pacific lands, including New Zealand, usually to combat invertebrate pests. Mynas are large, conspicuous passerines. A shiny black head and shoulder plumage merges into vinous brown for the remainder of the body and a large patch of white is flashed from each wing during flight. They are commonly seen deftly avoiding traffic while foraging for road-killed insects. At dusk small groups join communal roosts, which may comprise many hundreds of individuals. Mynas, originally widely introduced to New Zealand in the 1870s, are found in all suitable manmade habitat north of 40° S, including forest remnants and many offshore islands, but are in low numbers or absent from some parts of the volcanic plateau and large forest tracts such as Urewera.

Mynas are stocky brown birds with a shiny black head and shoulders. They are commonly seen in pairs or in small family groups. Adult primaries are black when new but fade to brown. The base of primaries is white and all upper and lower coverts are also white. The tail is black when new, all feathers tipped in white which abrades off during the breeding season. The bill and naked eye surround is bright yellow. The iris is dark brown over grey, with distinct white flecks. Legs are yellow brown and the claws horn-coloured. Juveniles are of paler plumage, the bill is light yellow streaked with dark grey, and the skin around the eye is white for the first two weeks. Juvenile tail feathers are without white tips and the iris is grey.

Voice: a loud chickork-chickork-chickork (territorial proclamation) given while head-bobbing, may be accompanied by a complicated series of quiet calls including pee pee pee, bell-like notes and deep guttural booming. Other quiet trills are used when inviting a mate to fly.

Similar species: there are no similar species in New Zealand; the common starling is the only other member of same family.

North of 40° S, mynas are found throughout the North Island and offshore islands but are absent from some areas of the volcanic plateau and large forested tracts such as Urewera National Park. They are also rare in the interior of forest remnants. Their natural distribution includes the entire South Asian region. They are now found on all continents with the exception of South America and Antarctica, and also many islands in the Pacific, Indian, and Atlantic Oceans. They are widely regarded as serious invasive pests.

The myna evolved to live in the tropics. It appears that the ambient temperature south of 40° S (i.e. Marton to Waipukurau) was insufficient to allow long term population survival. Some groups of mynas held on for many years around piggeries, but when whole milk collection replaced butter fat production and piggeries became rarer, the mynas could not balance their energy budget and died out. North of 40° S the population spread and increased, so that now in the north of the North Island mynas are one of our most conspicuous birds.

Mynas nest in cavities, inside the eaves of houses, in letter boxes and cardboard cartons (even on the ground) and nesting boxes. Nest are made of dried grass, straw, cellophane and plastic and lined with green leaves - often eucalyptus leaves - just prior to laying. Nest preparation begins in late August to early September. Nests can be built in a week but usually take a few weeks. Laying begins in November and is finished by early February; Two peaks to egg laying representing first and second clutches occur in November and January. The few clutches between these two peaks are either replacement clutches, or clutches laid by inexperienced pairs. Clutch size averages 4 (1-6), the incubation period is 14 days; only the female has a true brood patch. Nestlings fledge 25 (20-32) days after hatching. Both parents feed the fledglings for 2-3 weeks, and approximately 20% of these die before independence. Productivity is about 2 chicks per annum per pair to independence.

Mynas are not obviously sexually dimorphic. They pair for life but quickly find a new mate on the death of their previous mate. Both members of a pair proclaim ownership of a nest and territory using the head bob and loud call display described above, and vigorously defend their nest site and feeding territory against all other mynas. They destroy eggs and nestlings of any other species within their territory (especially starlings). Territories measured in Hawke’s Bay averaged about 1.5 ha (0.6-2.3). In winter, they fly to communal roost up to 2 km distant. In the morning, they forage on roads then return to their nest site.

Mynas are omnivorous. They consume pasture and crop invertebrates, including some that are crop pests. Also nightshade fruit and other fruit, especially berries. They peck at the flesh of ripe karaka fruit rather than swallowing the whole fruit. Mynas are most often seen along roads, where they seek road-killed insects. They often frequent refuse dumps in winter, seeking food scraps, and flock onto paddocks being ploughed. Mynas also take nectar, and are sometimes seen with orange flax pollen on their foreheads.