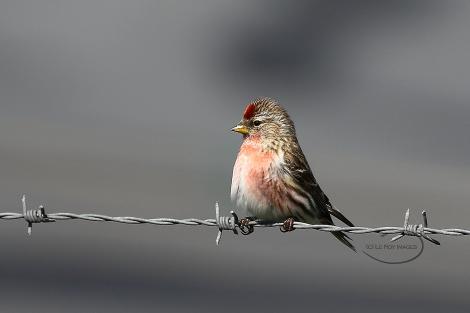 Common redpolls are small finches with a distinctive red patch on the crown. They were introduced from Britain between 1862 and 1875, and are now common in hill-country throughout much of New Zealand during the breeding season. Redpolls are frequently seen in flocks interspersed with other finches in the lowlands in winter. They feed mainly on a range of smaller seeds. These are frequently taken while hanging upside-down from seed heads or the cones of trees such as birch and alder.

Redpolls are the smallest of New Zealand’s introduced finches. They are brownish and streaked, and both sexes have the red crown patch. Adult males have a variable amount of pink on the lower throat and breast. This only appears after the bird’s second moult, so first-year males are indistinguishable from females in the field. Some adult females and first-year males may have a slight pink flush on the breast, but this is not normally visible in the field. Juveniles are similar to the adult female, but are paler and lack any red colouration on the crown.

Voice: redpolls have a distinctive flight call: chich-chich-chich. Variations of a tsooee call are uttered either as an alarm call or as a contact call while perched.

Similar species: from a distance, the redpoll could be confused with a female house sparrow, which is similarly streaked. However, the sparrow is a larger bird with a heavier bill, and it also lacks any red or pink in its plumage.

The redpoll is widespread throughout the South Island, and is also found on many off-shore islands. In the North Island, it is found in all regions, but is generally less abundant than in the South Island. The redpoll has colonised many outlying islands; it is a common resident on the Chatham Islands, and Campbell and Macquarie Islands. Smaller numbers are present on Snares, Antipodes and Auckland Islands, and it has been recorded as a vagrant on the Kermadecs and Lord Howe Islands. Single birds were recorded on the Bounty Islands in December 1990, and in Vanuatu in 1992.

The natural range of the common redpoll is North America, Greenland, Iceland and Eurasia from Britain east to Japan.

In New Zealand, redpolls occur in all types of open country from sea-level to 1500 m, including rough scrubby farmland and tussock grassland. They also inhabit forest and shrubland, but generally in clearings. Redpolls frequent gardens, parks, golf courses, croplands and orchards, especially outside the breeding season.

Redpolls are fairly common, especially at higher elevations in the South Island. They are also common on the Chatham Islands, and Campbell and Macquarie Islands; with lower numbers present on other outlying islands. However, there seems to have been a decline in the abundance of this species in recent years, especially in parts of the North Island.

There are no reported ecological impacts caused by redpolls. They may cause economic losses to orchardists, and are considered a pest in some fruit-growing districts of the South Island, especially Central Otago. Damage to the buds of a variety of fruit trees has been reported during a short period in early spring. Strawberries may be damaged as a result of the birds pecking the seeds from the fruit. Redpolls may also eat newly-sown grass seed.

Redpolls breed from mid-October until the end of March, usually producing two clutches per year. They are monogamous during the breeding season, with males defending a poorly-defined territory. The female builds a small, neat cup-shaped nest of fine grass and twigs, lined with hair and feathers. The male feeds his mate while she incubates the clutch of three to six (typically four) eggs. When these hatch, both parents feed the chicks by regurgitation until fledging, and for approximately two weeks afterwards.

Redpolls feed on the ground or from weeds growing near the ground, and also amongst the branches and foliage of shrubs and trees. They frequently perform acrobatic acts to reach seeds located near the tips of thin twigs.

During the breeding season, the redpoll is most often observed either as single individuals or in pairs. Small groups of juveniles or mixed groups of adults and juveniles may feed together. They are gregarious during the non-breeding period, when they may gather into large flocks of hundreds or even thousands of birds. One flock was estimated to contain more than 100,000 birds. The composition of the flocks may vary; age and sex proportions changing according to the time of year. Redpolls may form mixed flocks with other species of finches and yellowhammers at a good food source.

There is no evidence of regular internal migration, but local movements occur in response to seasonal food availability. There is an altitudinal component in many of the movements, as many birds breed in high country which they vacate during winter when there is little food available. Movements are often irregular, and birds have reached many outlying islands unaided.

The redpoll feeds mainly on seeds, gleaned from a variety of weeds, shrubs and trees. These include the seeds of grasses (especially Poa annua and toetoe), rushes, dock, dandelion, and annual weeds such as fat hen and Amaranthus. A variety of tree seeds including those of birch and alder are taken. Small insects such as aphids form a minor part of the diet, eaten mainly during the breeding season. Buds are also consumed, most frequently in late winter and early spring when preferred food sources are not available.

A small brownish-streaked songbird species with a bright red crown patch and a stubby yellowish bill. Adult males have a variable amount of pink on the lower throat and breast which only appears after the second moult; some adult females and first-year males may have a slight pink flush on the breast and juveniles look similar to adult females but are paler and lack any red on the crown.

Calls from large flock in scrub

Calls from a flock in light scrub

Calls from a flock in light scrub

Anxiety call of adult perched in shrub (bellbird in background)