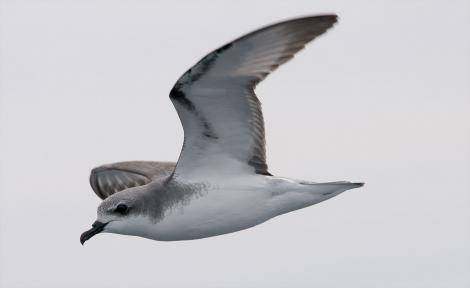 Cook’s petrels are small seabirds that breed on Little Barrier and Great Barrier Islands, off north-eastern North Island, and Codfish Island, near Stewart Island. They are commonly seen in large flocks off Little Barrier Island during the summer, and their calls are often heard at night during the spring and summer as birds cross over the Auckland isthmus and Northland after feeding in the Tasman Sea. They feed on small crustaceans, squid and fish, mostly picked off the ocean surface during long distance flights covering many thousands of kilometres. Cooks petrels have responded well to pest control on their main breeding islands and both populations are increasing rapidly.

Cook’s petrel is a small grey-and-white gadfly petrel with narrow wings and a pointed tail in flight. It has a grey head with white-and-dark speckling on the forehead and crown. The upper surface is evenly grey contrasting with darker brown-black feathers running across the upper wings and rump in an M shape. The undersides are mostly white, with a thin dark patchy line on the leading edge of the outer underwing. The black bill is 25-30 mm long. The eye is dark, and the legs are dull blue-grey with yellowish webs and black margins.

Similar species: Pycroft’s petrel is slightly smaller with darker-grey plumage above, and lacks the speckled feathers on the crown. Gould’s petrel has a much darker head with an extensive dark cap, and a more extensive black leading edge on the underwing.

Cook’s petrels formerly bred throughout both the North and South Islands, on mountain tops and ranges.  After hundreds of years of predation by introduced mammals, they became confined to just three islands. In the north the largest colony is on Little Barrier Island, with a few on nearby Great Barrier Island. In southern New Zealand, Cook’s petrels breed on Codfish Island off the coast of Stewart Island. They generally nest under tall forest. On Little Barrier Island, most burrows are found above 250 metres altitude or in pockets of mature vegetation below this height. On Codfish Island they breed at a range of altitudes down to near sea level, suggesting broad tolerance for breeding habitat. Cook’s petrels nest in long twisting burrows amongst tree roots, under rocks or below fallen tree stumps, in sandy or peaty soils.

Cook’s petrels are specialist deep water (pelagic) foragers whose at-sea distribution during breeding is within deep oceanic waters of the Tasman Sea and western South Pacific from approximately 32°S to the sub-tropical convergence zone. After breeding they migrate to the North Pacific transition and California Current system (northern populations), or to the Humboldt Current off Peru and Chile (Codfish population) to complete the annual feather moult.

Introduced predators are a major threat to Cook’s petrels. Pacific rats were present at all of their breeding sites including the mainland but now only remain on Great Barrier Island. Additionally, there are ship rats, feral cats and feral pigs on Great Barrier Island. All introduced predators have been eradicated from Little Barrier and Codfish Islands. In high-altitude colonies on Little Barrier Island, rats took more than 90% of eggs and small chicks in some seasons. After rat eradication in 2006, the breeding success rate increased from 5% to 60%. On Codfish Island introduced weka almost extirpated the Cook’s petrel population (estimated at 20,000 pairs in 1934). The colony has recovered following weka eradication in 1980, but is still less than a quarter of its original size. The risk to Cook’s petrels from fisheries impacts appears to be minimal. Attempts to establish a Cook’s petrel colony within a predator-exclusion fence on Cape Kidnappers, Hawke’s Bay, began with translocation of over 400 chicks from Little Barrier Island  in 2010-16. There is no evidence to date that this translocation has been successful. From 2013 the Department of Conservation has translocated chicks from Little Barrier Island to the Boundary Stream Mainland Island, also in Hawke's Bay. This project is ongoing.

The breeding season for Cook’s petrel runs from September to April, with the northern population breeding one month earlier. [The dates given here are for the northern population.] Following a first burrow visit in September, birds depart on a pre-laying exodus of approximately 27 days. A single white egg (53 x 39 mm) is laid in November and hatches from December to January after 47 days of incubation. The well-lined nest chamber is at the back of a very long burrow that can run across the slope amongst tree roots. Most birds breed annually and the same pairs can breed together and rear many chicks over multiple years. Both adults share incubation shifts of about 14 days and share in the feeding of their chick. The chick is independent of the parents at fledging in March (c.88 days old); the parents leave on their migration approximately 10 days before the chick departs. Age of first return to colonies is unknown (probably c.3 years).

Cook’s petrels are nocturnally active at breeding grounds, arriving about an hour after sunset. Their activity ashore peaks on dark nights or during periods of wet, stormy weather. On Little Barrier Island their calls can be almost deafening as thousands of birds descend upon the island after dark. However, very few birds call on the ground. Recent tracking studies show that Cook’s petrels mostly forage at the sea surface, but can dive down to 20 m or more. They cover hundreds or even thousands of kilometres during single foraging trips.

Comparison of the behaviour, ecology and genetics of the northern and southern Cook’s petrel populations suggest that they should be considered as distinct subspecies.

Cook’s petrels feed mainly on small squid, plus some fish and crustaceans. Chicks are fed an average of 37 g of food, with adult foraging trips averaging approximately 6 days and chicks thus being fed approximately every 3 days. The type of foods eaten suggests most of the feeding is done at night, although activity loggers showed that birds were also active by day during the breeding season.

A small gadfly petrel with narrow wings, a pointed tail in flight, black bill, dark eyes, blue-grey legs, grey head speckled on the forehead and crown, and a grey upper surface contrasting with darker brown-black feathers running across the upper wings and rump in an M-shape. The undersides are mostly white with a thin dark patchy line on the leading edge of the outer underwing.

Flight calls over breeding grounds, with some 'purr' calls from ground