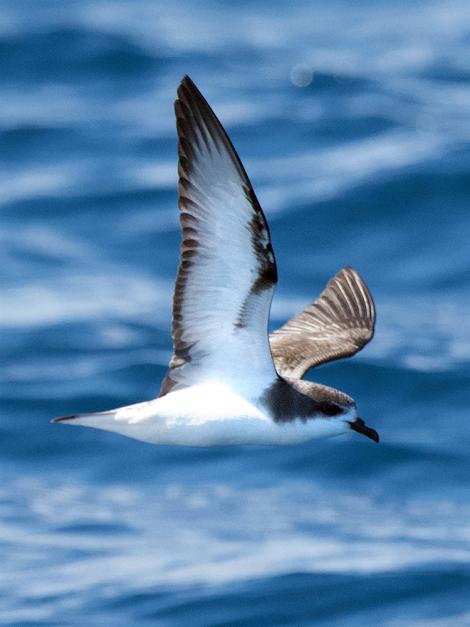 Pycroft’s petrels are small seabirds that breed on small offshore islands off the north-eastern coast of North Island. They are a species that few people have seen as the birds breed on islands with restricted access and they forage far out at sea. They also look very similar to the more common Cook’s petrel and are difficult to separate at sea. Pycroft’s petrels feed on small crustaceans and squid, mostly picked off the ocean surface during long distance flights covering many thousands of kilometres. Before the 1990s, Pycroft’s petrel was in decline due to Pacific rat predation of their eggs and chicks on their breeding grounds. However most of these island colonies have now been cleared of rats and the species is increasing in numbers, especially in the Mercury Island group.

Pycroft’s petrel is a small grey-and-white gadfly petrel with narrow wings and a pointed tail in flight. It has a dark grey head with white-and-dark speckling on the forehead. The upper surface is grey contrasting with darker brown-black feathers running in a broad ‘M’ across the upper wings and rump. The underside is mostly white but with a thin dark line on the leading edge of the outer under-wing. In the hand, the black bill (23-26 mm long, 9-11 mm deep) has a sharp hook. The legs are blue-grey with pink-mauve webs.

Voice: The calls of Pycroft’s petrels are similar to those of other closely related small gadfly petrels, including shrill whistles (ti-ti-ti or zip-zip-zip) and lower pitched calls (boor and yap-yap sounds).

Similar species: the very similar Cook’s petrel is slightly larger with paler grey plumage above and more speckled feathers on crown. Gould’s petrel has a darker head forming an extensive dark cap, and a more extensive black leading edge on the under-wing.

Pycroft’s petrels breed in colonies on the Mercury, Hen and Chickens, Poor Knights and Ririwha Island groups off north-eastern New Zealand. From 2001-03, chicks were transferred to Cuvier Island to form a new colony there. They previously bred on Norfolk Island. They nest in burrows amongst tree roots or under rocks, usually avoiding dense clay soils. The breeding burrows are normally dug on well-drained slopes under tall forest of pohutukawa, mahoe or tawapou. Pycroft’s petrels forage over warmer water north of the sub-tropical convergence zone, mainly over deep water beyond the continental shelf. After breeding they migrate to the tropical central Pacific to complete the annual feather moult.

There are no robust estimates of population size from the breeding islands. The population on Red Mercury Island has increased rapidly after Pacific rats were eradicated in 1992, with an estimated 5000-10,000 pairs now present. This represents perhaps 75% of the world population. Smaller but probably increasing populations of hundreds and possibly thousands of pairs occur on Stanley, Double and Lady Alice Islands. The remaining islands probably support fewer than 100 pairs each but there are no monitoring data to track population changes.

The major threat to Pycroft’s petrels, as it is for all gadfly petrels, is the introduction of mammalian predators on their breeding grounds. Pacific rats were present on most of the breeding sites and studies showed that most eggs and chicks were eaten by this rodent. After the rats were removed from the islands by aerial poisoning operations conducted by New Zealand Department of Conservation between 1991 and 2011, breeding success improved dramatically with more than 80% of pairs fledging chicks. Fire is also a threat to this seabird with the northern islands becoming very dry in late summer. The risk to Pycroft’s petrels from fisheries impacts appears to be minimal.

The Pycroft’s petrel breeding season is from October to April, with the single white egg (48 x 35 mm) laid in late November or early December and hatching in January. The egg is laid in a well-lined nest at the back of a burrow that can be quite short. Most birds breed annually and the same pairs can breed together and rear many chicks over multiple years. Both birds share incubation shifts and feeding of their chick. The chick is independent of the parents at fledging. The immature birds begin to return to colonies at 2-3 years of age and some start breeding the following season although others take 5-10 years to begin breeding.

Pycroft’s petrels are nocturnally active at breeding grounds, arriving about an hour after sunset. Their activity ashore is more pronounced on dark nights (no moon) or during periods of wet, stormy weather. The birds can be quite noisy when flying over the islands and call repeatedly with many pairs engaged in aerial chases. Calling on the ground is less frequent and it is difficult to locate birds once they land. There is very little information known about their life at sea. Recent tracking studies show that the birds mostly forage at the sea surface, with only shallow dives recorded. Pycroft’s petrels fly hundreds or even thousands of kilometres during single foraging trips.

Pycroft’s petrels have been recorded feeding on crustaceans and small squid. Chicks are fed on average 34 g of food every second night, and there is a desertion period in the final week before fledging. There is no information on whether feeding occurs mainly by day or at night.

A small gadfly petrel with narrow wings, a pointed tail in flight, a dark grey head with white-and-dark speckling on the forehead and a grey upper surface contrasting with darker brown-black feathers running in a broad ‘M’ across the upper wings and rump. The underside is mostly white with a thin dark line on the leading edge of the outer underwing, the hooked bill is black and the legs blue-grey.

Calls from single bird in burrow