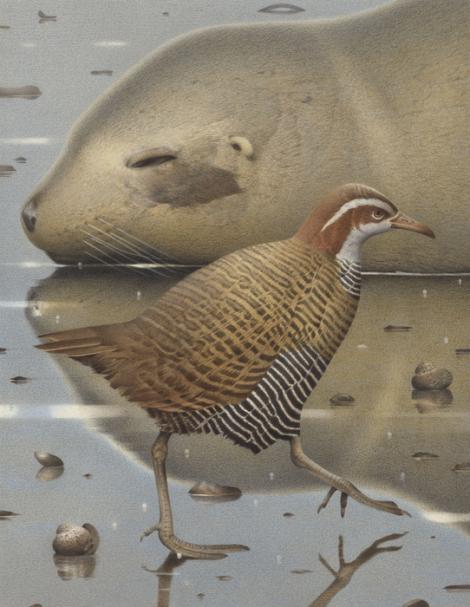 Ernst Dieffenbach, naturalist for the New Zealand Company, spent about a month on the Chatham Islands in May and June 1840. He recorded that “A new kind of rail was formerly very common; but, since cats and dogs have been introduced, it has become very scarce. The natives call this bird meriki, and catch it with nooses. I often heard its short, shrill voice in the bush, and after much trouble, obtained a living specimen.” This specimen was sent to the British Museum where it was named in his honour. No further live birds were ever reported, and Dieffenbach’s rail is considered to have become extinct soon after 1840.

Ancient DNA studies have shown Dieffenbach’s rail to be closely related to the Mangere Rail, another species that was restricted to the Chatham Islands. These two flightless species are believed to have evolved from a common ancestor within the Chatham group.

Dieffenbach’s rail was similar to a banded rail but much heavier in build, flightless (with shorter wings), and a more curved bill. The crown and nape were dark rusty brown and there was a chestnut brown stripe through the eye, tapering behind. The chin, throat and a long stripe above the eye were grey. The back feathers and those on the breast were yellowish-brown banded with black. The fore neck and belly were black barred with white, and the under-tail was black with reddish brown markings. The primaries were chestnut banded with black, and the tail was dark rusty brown. The bill was light brown, darker toward the tip, the legs and feet light brown, and the eye reddish brown.

Bone deposits reveal that Dieffenbach’s rail occurred on Chatham, Pitt and Mangere Islands (at least), in forest and along coastlines.

Dieffenbach’s rails were already declining rapidly when discovered in 1840. This was attributed to the increase of cats and dogs, but both Norway and Pacific rats were also present. The birds on 131 ha Mangere Island did not face any exotic predators except humans until the 1890s. It is presumed that the inevitably small population of Dieffenbach’s rail there was exterminated by hunting, or succumbed to a climatic event with no possibility of recolonisation.

Elderly Moriori (the original people of the Chatham Islands) recalled that the birds were fairly tame and easily approached, and that their eggs were spotted and about the size of a medium or small hen’s egg.

A small extinct flightless rail with a decurved brown bill, reddish brown eyes, and light brown legs. The crown, nape and face were dark rusty brown with a grey stripe above the eyes and grey on the throat chin and throat, the back and breast feathers were yellowish-brown banded with black, the fore neck and belly were black barred with white, and the under-tail was black with reddish markings.