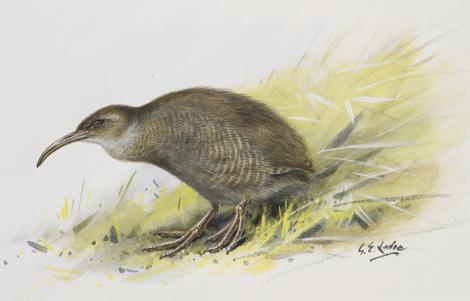 This small, delicate, long-billed flightless rail became extinct only a few years after its 1872 discovery by Henry Travers. Three specimens were originally documented by Captain Frederick Hutton but, out of these, only the juvenile can now be located. A total of only 34 skinned specimens survive in museums, but abundant fossils provide an additional rich source of information. Unfortunately very little was recorded about the behaviour of the species. The Chatham Island rail was one of six species of rail that occurred in pre-human times at the Chatham island group but all four endemic taxa are now extinct as a result of human caused changes.

The plumage of adult Chatham Island rails had a soft 'fluffy' appearance due to loose fitting feathers which in the past led some ornithologists to conclude that adults were actually juvenile Dieffenbach's rails. Adults were largely brown in colour but their ventral feathers were pale-tipped, which gave their undersides a faintly barred appearance. Their tails were very short and their legs and beak were brown. Males were larger than females. The young were uniformly brownish.

Voice: all that is known is that the mother of a young rail held by Henry Travers was attracted to the "plaintive cry" of its offspring.

Historically, the Chatham Island rail was reported only from 131 ha Mangere Island. However Holocene bone deposits show that the species was once widespread in the Chatham archipelago, with records from main Chatham, Pitt and Mangere Islands. In one cave beside Te Whanga Lagoon on main Chatham, bones of hundreds of individuals were found. Historic reports of the species from Pitt Island are based on misleading specimen labels.

Few observations of live Chatham Island rails were recorded. This may be partly because the species was mainly active at night. Henry Travers reported that the species was found "in a very rocky place, and when disturbed sought to hide themselves amongst the stones"; the birds that he collected "came out of the rocks at dusk, evidently to feed".

Fossils attest to the former abundance of the species in the Chatham Island archipelago. However on its last refuge of Mangere Island, Henry Travers reported seeing only three Chatham Island rails during 12 days ashore.

Almost nothing was recorded about the breeding habits of the Chatham Island rail. A single report states that nests were "in holes in the ground, and when the young hatched they [got] into fallen hollow trees" (Forbes 1893). Like the young of other rails, this indicates that hatchlings were precocial. The sole egg that was collected (28 x 37 mm) was nearly white, with faint grey and rufous spots.

Chatham Island rails were reported to feed on invertebrates, particularly hoppers (amphipods). The long bill is assumed to have been used for probing. When combined with its nocturnal habits, the species may have been superficially reminiscent of a miniature kiwi. It shared this niche with the Chatham Island snipe, which was also present on Mangere Island until the early 1890s.

Millener, P.R. 1999. The history of the Chatham Islands' bird fauna of the last 7000 years - a chronicle of change and extinction. Pp. 85-109 in Olson, S.L. (ed.) Avian paleontology at the close of the 20th century: proceedings of the 4th international meeting of the Society of Avian Paleontology and Evolution, Washington, D.C., 4-7 June 1996. Washington D.C., Smithsonian Institution Press.