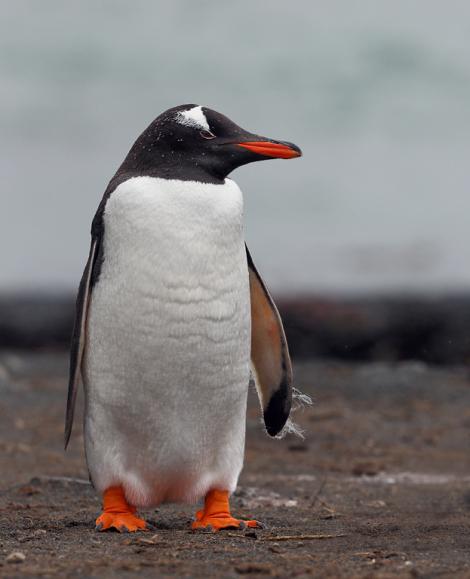 Gentoo penguins are easily identified by their large size, white head markings and orange bill. They live and breed in Antarctic and subantarctic circumpolar waters, breeding on the Antarctic Peninsula and on many island groups. Gentoo penguins breed alongside people on the Falkland Islands, and several colonies on the Antarctic Peninsula and on the adjacent South Shetland Islands are regularly visited by eco-tourism operators. Gentoo penguins are present all year round at many breeding areas, and are rare vagrants to New Zealand waters.

Gentoo penguins are the equal third largest penguin (with yellow-eyed penguin), and are most closely related to the Adelie and chinstrap penguins. They can swim underwater at speeds up to 36 km/h, the fastest recorded for any penguin.

Gentoo penguins are large penguins. They have a white triangle over each eye, joined by a thin white band over the hind-crown, and sparse white feathers elsewhere on the otherwise dark head. The rest of the head, the neck and the back are dark grey, and the bill and feet are bright orange. Their long tail sweeps from side to side as they walk. The sexes are identical though males are slightly larger.

Voice: the main call at colonies is a loud crowing ah, aha, aha, aha, eh delivered with the bill pointed skywards. The contact call given at sea and on landing is a short caw.

Similar species: no other penguin has a bright orange bill and white feathers over the eye.

An estimated 300,000 pairs of gentoo penguins live in the Antarctic and subantarctic regions. They breed on many islands in the South Sandwich, South Orkney, Falkland, Prince Edward, Crozet, Heard and Macquarie Island groups, plus South Georgia and the Antarctic Peninsula. Colonies can be close to the coast or well inland. Most birds do not move far from their breeding sites, feeding inshore. Their at-sea range is poorly known.

Gentoo penguin breeding colonies range from 2 to 12,000 pairs. The 2 eggs are laid from June through to November. Incubation is shared and takes about 35 days. Chicks fledge when 62-82 days old in the south of their range, up to 85-117 days in the north. Populations and breeding success can fluctuate considerably from year to year. Gentoo penguins can breed when only 2 years old.

Gentoo penguins feed on fish, squid and krill. They hunt mainly near the surface, but can dive to over 160 metres depth. Gentoo penguins usually forage within 20 km of their breeding colony.

A large black-and-white penguin with a white triangle over each eye joined by a thin white band over the hind-crown, sparse white feathers on the dark head, and a black-tipped orange bill. The rest of the head and the neck and back are dark grey, the bill and feet are bright orange, and the tail is relatively long.