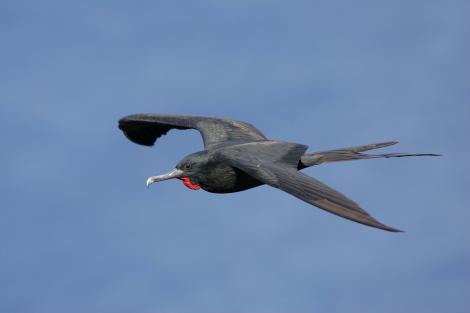 Frigatebirds are distinctive tropical seabirds that occasionally reach New Zealand, usually associated with tropical weather systems. There are five species worldwide. All are large, black-and-white, with long angular wings, deeply forked tails, and long, hooked bills. As their name suggests, they are aerial pirates, often robbing other seabirds of their food during spectacular aerial manoeuvres. The great frigatebird is the larger of the two species that reach New Zealand. Adult males are completely black, whereas females, immature birds, and all plumages of the lesser frigatebird have some white on the underparts.

The great frigatebird is a large, sinister-looking seabird with predominantly or entirely black plumage. It has long narrow wings (205-230 cm wingspan), a deeply forked tail and a long hooked bill. The male is entirely black, with (when breeding) a large red sac on the throat which is inflated during courtship displays. The head of females is black, with a grey chin and throat that merges with the white breast and flanks; the underwing is black. Immature birds have orange on the head and white underparts, with completely dark underwings.

Voice: generally silent, some warbles given in flight over breeding grounds, and repeated whistling when landing.

Similar species: the very similar lesser frigatebird also has distinct male, female and immature plumages. The key features to note on all frigate birds are the extent of any white markings on the underparts, particularly whether these extend onto the underwing or chin, and any orange on the head indicating immaturity. Adult male lesser frigatebirds are black with a narrow white pectoral girdle extending a short distance on to each underwing. Adult females have a black chin, and the white patch on their breast is not divided into two lobes (cf. female great frigatebird) but which extends slightly on to the underwing. Immature frigatebirds of both species are very similar (orange head, white on belly), differing only in whether the white breast patch extends onto the underwing, which is a consistent and diagnostic marker of lesser frigatebirds.

Great frigatebirds are found throughout the tropical and subtropical Indian, Pacific, and south Altantic Oceans. They are vagrant to the south Pacific, including New Zealand.

There have been about 20 sightings of great frigatebirds in New Zealand since 1851, south to Castlepoint, Nelson, Cape Farewell and Westport. Most sightings have been of single birds, but there were at least eight birds on and over the Herald Islets and Raoul Island (Kermadec Islands) in March-April 2016.

Frigatebirds have a very light skeleton and long, narrow wings, making them adept and efficient fliers. They rarely swim and cannot walk on land. Great frigatebirds are the only birds known other than swifts that are able to stay aloft for months, and are assumed to be able to sleep while airborne. By using wind-drift circling, soaring and long periods of gliding, frigatebirds are able to use both convection and wind as energy sources, travelling long distances with low energy costs. Great frigatebirds nest in low vegetation, where they can land and take off directly from the nest site. Frigatebirds catch flying fish in mid-flight, and harass other sea birds to force them to disgorge their catch, which is then caught in mid-air by the frigatebirds.

Mostly flying fish and some cephalopods, all food taken while in flight.  No New Zealand data.

A large black tropical seabird with long narrow wings, deeply forked tail and long hooked bill. In breeding condition males have a large red fleshy throat sac which is inflated during courtship displays; females have a black head with grey chin and throat merging with white breast and flanks.

Calls from a chick