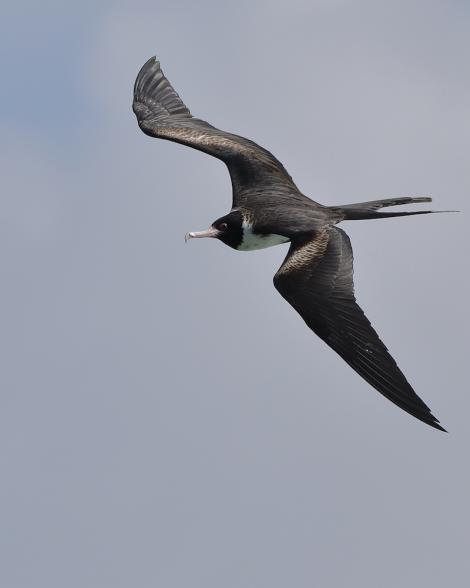 Frigatebirds are distinctive large tropical seabirds that occasionally reach New Zealand, usually associated with tropical weather systems. There are five species worldwide. All are black-and-white, with long angular wings, deeply forked tails, and long, hooked bills. As their name suggests, they are aerial pirates, often robbing other seabirds of their food during spectacular aerial manoeuvres.

Lesser frigatebirds are large, predominantly black birds with long narrow wings (175-195 cm wingspan), a deeply forked tail and a long hooked bill. They are most often seen soaring stiff-winged high over the sea or coastline, occasionally descending to pursue other fish-eating birds. The male is mostly black, with a white patch on each flank which continues as a spur on to the underwing. When breeding, males have a large red sac of skin on the throat which is inflated during courtship displays. The neck and breast of females are white, contrasting with the black chin and head, which gives them the appearance of having a black hood. Females also have a white spur extending onto the underwing. Immature birds have pale orange heads, white bellies extending as a V towards the vent, and white extending onto the underwing as for adults

Similar species: the very similar great frigatebird also has distinct male, female and immature plumages. The key features to note on all frigate birds are the extent of any white markings on the underparts, particularly whether these extend onto the underwing or chin, and any orange on the head indicating immaturity. Adult male great frigatebirds are completely black. Adult females have a white chin, and the white patch on their breast is divided into two lobes by a black V reaching forward from the belly. Immature frigatebirds of both species are very similar (orange head, white on belly), differing only in whether the white breast patch extends onto the underwing, which is a consistent and diagnostic marker of lesser frigatebirds.

Lesser frigatebirds are found throughout the Indian Ocean, western and central Pacific Ocean, and off Brazil in the Altantic Ocean. They are vagrant to New Zealand, where there are scattered records mostly from Northland, but also south to Southland and east to the Chatham Islands.

Frigatebirds have a very light skeleton and long, narrow wings, making them adept and efficient fliers. They rarely swim and cannot walk on land. They nest in low vegetation, where they can land and take off directly from the nest site. Frigatebirds catch flying fish in mid-flight, and harass other sea birds to force them to disgorge their catch, which is then caught in mid-air by the frigatebirds.

Fish and some cephalopods, all food taken while in flight. No New Zealand data.

A large mainly black tropical seabird with long narrow wings, deeply forked tail and long hooked bill, and a white patch on each flank which reaches the underwing. In breeding condition males have a large red fleshy throat sac which is inflated during courtship displays; females have a white neck and breast that contrasts the black chin and head, giving a hooded appearance.

Range of calls from birds on colony