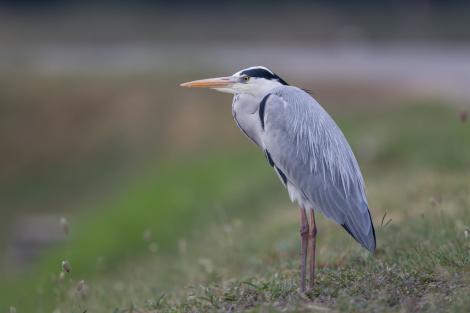 The grey heron is a very large heron that is widely distributed across Europe, Asia and much of Africa. It has been recorded in New Zealand on a single occasion, when a first-year bird was captured on a yacht off the east coast of the North Island in about 1898. The specimen is held, along with the rest of Sir Walter Buller’s ‘third collection’, in Carnegie Museum, Pittsburgh, Pennsylvania.

A large heron; larger than white heron, with dark grey back, paler grey underparts, white head and neck with black streaking on front of neck, and black crest. In flight the dark grey body and forewings contrast with black flight feathers.

Voice: a harsh ‘frank’ given in flight, often when flushed.

The grey heron is widely distributed across Eurasia, with a small, isolated population breeding in Sumatra, Indonesia. They occur widely throughout freshwater and coastal wetlands.

A single record off the east coast of the North Island in about 1898. Walter Buller purchased the specimen in London, and subsequently sold it to the Carnegie Museum, where it remains.

Habitat destruction is adversely affecting grey herons in the Malay Peninsula, and probably elsewhere. Grey herons suffered badly from the pesticide DDT which caused eggshell thinning and low breeding success. DDT is still used in China and a growing number of other chemicals, such as fire retardants, are now polluting water bodies and may be affecting birds such as herons.

Grey herons breed colonially, usually in trees, but occasionally on the ground. Usually 4 eggs are laid in a stick nest.

The northern East Asian population is strongly migratory, and is the most likely source of the New Zealand bird, in contrast to the more sedentary Malaysian Peninsula/Sumatran population.

Mostly fish, particularly eels, but will also take a wide variety of other aquatic prey as well as small mammals and birds.

Chattering from chicks punctuated by barks from adults