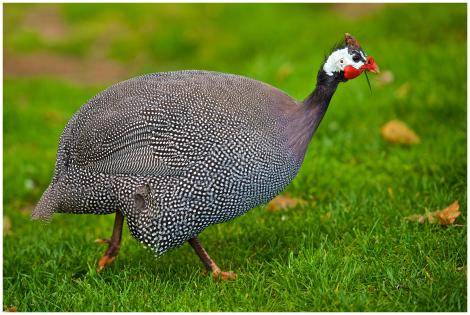 This distinctive African gamebird was first introduced to New Zealand in the 1860s; none of these early releases was successful. The scattered groups of birds found today probably all originated from birds that have wandered off from farmyards. The species has been domesticated for thousands of years, and probably all birds released locally come from domestic stock.

The helmeted guineafowl is a plump chicken-sized bird with a characteristic humped-back appearance. The slate grey plumage is speckled with numerous white spots, the neck is short and featherless, and the small bare head bears a scimitar-shaped bony casque. Skin on the lower face and upper neck is sky blue with red-tipped wattles and a darker blue throat flap. The cere, forehead and crown are red, the bill and casque are horn-coloured, and the iris brown. The lower neck is covered with brownish-grey down-like feathers that extend halfway up the back of the upper neck. Lower down these merge into normal slate-grey body feathers, each of which has a dozen or more uniformly spaced white spots, creating an overall speckled appearance. The flight feathers are similarly patterned, although the dots on the outer webs merge to form fine white stripes that align when the wing is closed, creating a barred appearance. Birds from domestic stock often have whitish facial skin, occasional white flight feathers, and irregular patches of white on the flanks and belly. The legs are dark grey in wild-type birds, and orange-brown in domestic birds; leg spurs absent. Females have shorter and narrower casques and smaller wattles, but are best distinguished by their distinctive, sex-specific call (see below).­­­ Young birds are similar to adults but have paler facial skin and less obvious white spots. Chicks are brownish-grey, with black fringes to the body and emerging flight feathers. Their head feathers are brown with longitudinal black stripes.

Voice: males give a single, recurring chek note; females produce a distinctive, repetitive two-syllable call buck-wheat, the first note short, second one longer and rising. In both sexes, the rate of repetition of their calls increases when birds become agitated or excited. The alarm call is a repeated, harsh, rattling kek-kek-kek-kek-krrrrrrr.

Similar species: adult helmeted guineafowl may resemble adult female and immature wild turkeys and common pheasants but are distinguished by white-spotted grey plumage and a bony casque on the head.

During the period 1999-2004, helmeted guineafowl were recorded from less than 1 per cent of the country, mostly around Auckland and farmland around Kaipara Harbour. Some earlier reported populations, such as around Aberfeldy, near Whanganui, no longer exist. Guineafowl do best in areas that have a mosaic of habitats. Populations tend to decline in areas of uniform grassland and pasture, especially where pesticides are commonly used.

The size of the current wild population is unknown but probably small. The history of failed introductions and small, short-lived populations suggest that this species cannot sustain itself naturally in New Zealand, at least under present conditions. There are a number of registered breeders in New Zealand, and an unknown number of owners of domestic guineafowl flocks, both of which can serve as sources of deliberate or inadvertent re-introductions.

Guineafowl can damage emerging seedlings of agricultural crops, but this is offset partly by the number of insects that they eat. Guineafowl are prime gamebirds in other parts of the world, but require careful management to prevent overharvesting.

Guineafowl breed in spring and summer, probably timed so that eggs hatch when arthropods and seeds are most abundant, towards late summer. At the start of the breeding season, a male associates successively with a number of females before pairing with one of them. The pair keep close together for the rest of the season, the male feeding his mate during courtship and guarding her during egg laying and incubation. The nest is a deep scrape lined with grass and detached feathers, placed beneath a bush or in dense cover. Females lay 6-12 cream-brown, pear-shaped eggs that she alone incubates. Larger clutches have been recorded elsewhere, but probably represent eggs laid by more than one female. The shells are noticeably thicker and stronger than those of domestic chickens. Eggs hatch after about 26 days, and the chicks leave the nest soon after hatching, feeding for themselves but copying their parents while following them closely. Both parents brood the young chicks initially. Chicks can fly weakly when 2-weeks old, and become fully fledged about 2 weeks later.

Helmeted guineafowl usually occur in small flocks of 6-20 birds, foraging by walking and pecking or scratching the ground like chickens, calling as they move. Males in flocks often chase each other around, perhaps consolidating their social hierarchy; outright fighting is rare. The birds generally stay close to cover when foraging. If disturbed, they tend to run rather than fly but, when necessary, they will burst from cover in steeply angled flight, giving jarring alarm calls kekkekkekkek. Guineafowl roost in trees at night. Birds gathering before going to roost are noisy, give a mix of kek-kek calls and a softer version of the buck-wheat call.

Nothing is known of the diet of helmeted guineafowl in New Zealand. Elsewhere they are omnivorous, eating grass seeds, fruits, leaves, other vegetable matter, and invertebrates. They use their strong legs and toes to grub out bulbs, seedlings, beetles, bugs, and insect larvae; leaves, flower heads and fruits of herbaceous plants are plucked from growing plants. Small lizards, frogs and even small mice are pursued and dispatched with a sharp jab and flick of the bill. Occasionally, birds can be seen jumping a few centimetres off the ground to pluck food items just out of reach.

A plump chicken-sized bird with a humped-back appearance, small head and short neck. It has a bony horn or casque on top of the head and its slate grey feathers are speckled with white spots.