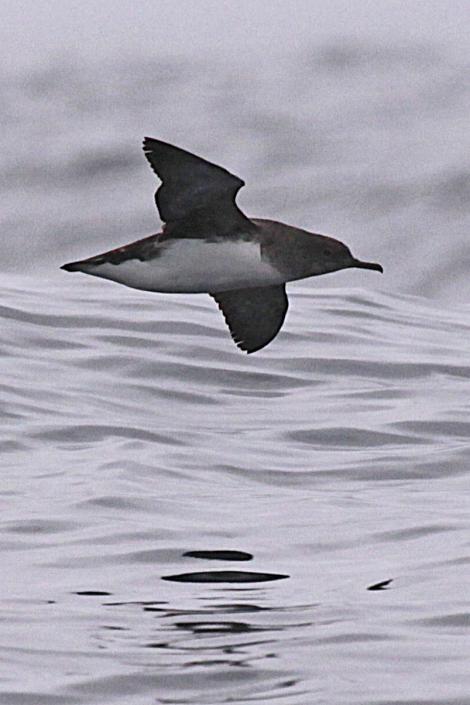 Hutton’s shearwater is one of the few New Zealand seabirds that breeds solely on the mainland. The two colonies are restricted to the alpine zone of the Seaward Kaikoura mountains behind Kaikoura. These are the last remnants of many colonies that formerly existed in both the Seaward Kaikoura and Inland Kaikoura Ranges, ten of which survived through until the 1960s. The loss of colonies is largely attributed to them being accessible to feral pigs. Whilst the number of colonies has diminished with the impact of predators, there is no evidence that the species ever bred beyond these mountains. The colonies were known to Maori who harvested the young birds for food, but it was not until 1965 that the locations of the two extant colonies were re-discovered by Geoff Harrow.

Since 1990, research has provided good information on the breeding biology of Hutton’s shearwater and the threats they face at these colonies. Information is also available on their distribution at sea both during and outside of the breeding season. A new colony has been established behind a predator-proof fence on Kaikoura Peninsula and is now managed by a community-based charitable trust.

Hutton’s shearwater is a medium-sized brown-and-white shearwater. It has dark-brown upperparts extending to the head. A broad dark mottled collar extends down from the neck, contrasting with the remaining white underparts. The off-white underwings merge into dark borders particularly at the wing tips and with distinctly dusky ‘armpits’. The bill is long, slender and dark grey. The eye is dark, and the legs and feet are pinkish-brown with dark webs. The feet extend beyond the tail in flight.

Voice: Hutton’s shearwaters are generally silent at sea, but are noisy on and over their colonies, with loud cackling calls similar to those of fluttering shearwater.

From September through to March, Hutton’s shearwaters are present over the inshore waters off Kaikoura. They congregate in large flocks before the evening flight into the breeding colonies. The largest colony is in the head of Kowhai Stream within a nature reserve; a smaller colony is on private land at the head of Shearwater Stream. All nesting is on steep tussock-covered slopes at sites above 1200 m altitude. The at-sea distribution of Hutton’s shearwaters within New Zealand waters is poorly understood as few observers attempt to distinguish Hutton’s and fluttering shearwaters at sea. There are sightings and beach-wrecked birds from Northland to Foveaux Strait, including East Cape and Westland, though it is apparent that the bulk of the population stays between Cape Campbell and Banks Peninsula, off the north-east coast of the South Island, when breeding. Outside the breeding season Hutton’s shearwaters are migratory and most are absent from New Zealand waters. Adult birds have been fitted with geo-locators which revealed details of their winter migration to Australia, with some birds completing an anti-clockwise circuit of the continent. Young birds stay in Australian waters for 4-5 years before returning to visit breeding colonies.

There is an estimated breeding population of more than 100,000 pairs of Hutton’s shearwaters, with a similar number of non-breeding birds that visit the colony early in the season. Despite this relatively high number the species is regarded as endangered because of their past decline (evident from extinct colonies) and the threats they still face.

Stoats prey on young Hutton’s shearwater chicks, and kea also excavate burrows and kill chicks. Studies have shown that the Kowhai Stream colony is too large to be adversely affected by stoat predation. Stoat control is undertaken at the smaller colony in Shearwater Stream, which is likely to be more vulnerable. The greater threat is from predation by wild pigs or trampling of the colonies by ungulates. All the colonies which have gone extinct in the last century have been destroyed by pigs. Studies of breeding success have shown big changes between years, presumably due to fluctuations in the availability of food at sea. Adult birds are occasionally killed in nets set for fish along the Kaikoura coast. As young birds fledge in autumn, some always fail to make the flight to sea, with storms or their attraction to street lighting cause them to crash near the township. Many, but not all, of these birds are rescued and released at sea.

The earthquakes of November 2016 caused considerable damage to the mountain colonies. Post-earthquake photographs show that 10-15% of the colonies were destroyed by landslides, and examination of 100 individual burrows at a site not affected by landslides showed that 36% of the burrows had collapsed. Some subcolonies remain too unstable to allow access for burrow checks.

A new colony is being established on the Kaikoura Peninsula, with chicks translocated from the Kowhai colony and managed largely by the Hutton’s Shearwater Charitable Trust. The 2016-17 breeding season was the most successful yet, with 12 chicks successfully fledged, including the first “grand child” of the colony (i.e. a chick of a colony-bred bird successfully fledged).

Hutton’s shearwater colonies are located on steep tussock slopes with deep and friable soil. Burrow density varies within sub-colonies with a mean of 0.5/m2. The peak of egg-laying is in early November with a 50 day incubation period followed by an average of 83 days before the chicks fledge. Most aspects of breeding biology are consistent with the general pattern observed in other Puffinus species, although the period of chick-rearing is longer. This may be due to difficulties in obtaining sufficient food, or the energetic costs associated with breeding in an alpine environment 1200 m above sea level.

Large flocks of Hutton’s shearwater gather off the Kaikoura coast during the summer breeding season and are visible from land as well as at sea. These birds fly close to the water in large flocks, settling to feed or rest. A flock of feeding birds may include those that are dipping at the surface for crustaceans and those that pitch in from a low flight to dive for small fish. These dives, propelled by partially-folded wings, can take the birds to depths of 20-30 m. Breeding birds fly in and out of the alpine colonies under cover of darkness. Birds arriving early in the season often find colonies covered in snow, but later in the year the colonies become hot and dry. Non-breeding birds frequent the waters around Australia.

A medium-sized shearwater with dark-brown upperparts extending to the head, a broad dark mottled collar extending down from the neck, white underparts from the upper-breast, and off-white underwings with dark borders and dusky ‘armpits’. The long slender bill is dark grey, the eyes are dark, the legs and feet are pinkish-brown with dark webs, and the feet extend beyond the tail in flight.

Individual birds on ground then a pair in burrow