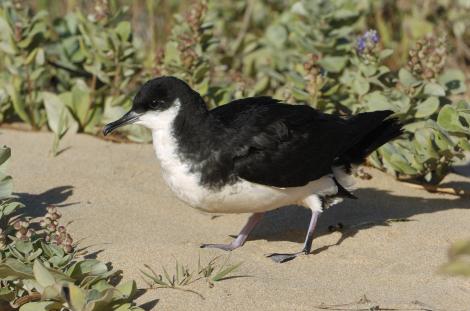 Newell’s shearwater is a small black-and-white Puffinus shearwater, usually considered part of the group that includes Manx shearwater P. puffinus, which it closely resembles. The nominate subspecies is an Hawaiian Islands endemic, with most of the estimated 18-19,000 breeding pairs on Kaua’i. Outside the May-October breeding season it is highly pelagic, ranging generally in the seas around the Hawaiian Islands. The much rare Rapa shearwater breeds on four islets off Rapa Island, eastern Polynesia. Newell’s shearwater is a rare vagrant to New Zealand (one record) and Norfolk Island (a live bird on Philip Island, December 1997, and one offshore in February 2010); it is not known whether these birds were of the Hawaiian or Rapa form.

Newell’s is a typical black-and-white Puffinus shearwater, with the characteristic rapid wingbeat and glide flight pattern of the smaller members of the genus. It is cleanly black-and-white, with very dark upper surfaces and prominent white flank ’tabs’, i.e. extensions of the white flanks to form white sides to the rump. The dark cap extends to below the eye, and there is a sharply defined broad wedge of white extending from the neck, with the point near the ear. The underwing is also cleanly black-and-white, with broad black margins. The undertail coverts are dark. The bill and eye are black, and the legs are pink with dark toes.

Similar species: fluttering shearwater also has white flank ’tabs’ (though not as pronounced) but is much browner and does not have a sharply defined white wedge behind the eye. Hutton’s shearwater is darker underneath (especially on the throat and underwings) and lacks the crisp white facial wedge and flank tabs. Manx shearwater is a very rare vagrant to New Zealand (3 records); it has white undertail coverts, and the underwing margins are not as bold and dark as in Newell’s shearwater.

The nominate form of Newell’s Shearwater breeds only on the south-east Hawaiian Islands, in recent years mostly on Kauai. It is highly pelagic during the non-breeding season, ranging widely in the Hawaiian Islands region. They occasionally occur as far as the south-west Pacific, with records (not all confirmed) from Fiji, Norfolk Island and offshore from Sydney.

The sole New Zealand record is of a beach-wrecked bird found near Dargaville in November 1994. The specimen is held in Te Papa (registration no. OR.025004).

The US Fish and Wildlife Service first listed Newell’s shearwater as a “Threatened Species” in 1975. Introduced mammalian predators are the key threats to Newell’s shearwater. Fledging birds are often attracted to city lights and are downed in significant numbers. The Hawaiian public is well-educated about this and many birds are saved.

Newell’s shearwater is a colonial nester, laying a single egg in June in a burrow. Burrows are located on steep ridges among tangled native vegetation, on Kaua’i generally between 150 and 800 m. Most fledging occurs in October and November.

Newell’s shearwaters leave their nesting sites in the early morning, and returning at dusk. At sea they are pelagic, generally feeding far offshore. They do not follow boats.

A small shearwater with dark upperparts and white flank ’tabs’, a dark cap extending below the eyes, and a sharply defined broad wedge of white extending from the neck to a point near the ear. The white underwings have broad black margins, the undertail coverts are dark, the bill and eye are black, the legs are pink with dark toes, and its wingbeats are rapid.