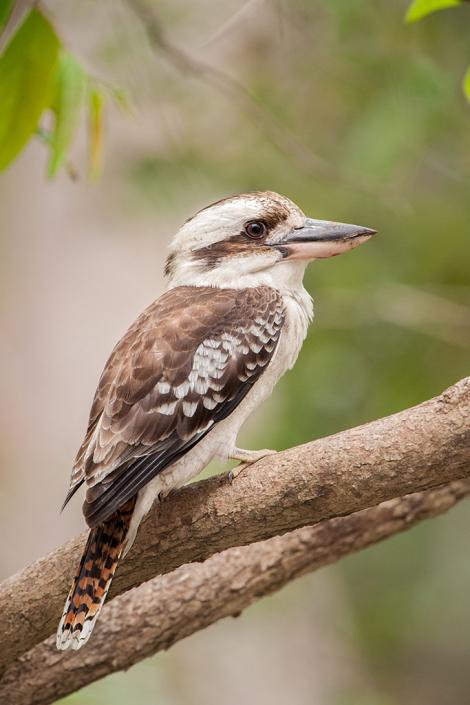 Kookaburras are the largest of the kingfishers. They have the big heads, long bills, and relatively small bodies and tails typical of the Southwest Pacific forest kingfishers to which they are related. They are native to eastern Australia and were introduced into Kawau Island, Hauraki Gulf, by Sir George Grey in 1866, and to Wellington, Nelson, and Otago between the 1860s and 1880. Only the Kawau population successfully established and subsequently colonised the adjacent mainland.

Unmistakable because of their large size and typical kingfisher shape. They have a pale head with dark brown ear-coverts, off-white underparts, brown back, and black-barred rufous tail, with blue on the rump and upper wing-coverts. The sexes are similar, but females tend to be larger.

Kookaburras have a repertoire of different vocalisations including their famous laugh (koo-hoo-hoo-hoo-ha-ha-ha-HA-HA-hoo-hoo-hoo) which is a territory song usually heard at dawn or dusk throughout the year and delivered by a number of birds simultaneously. Individual birds repeat the song for between 5 and 8 seconds. Six shorter calls have been recorded relating to courtship, feeding, contact, and danger.

Found on Kawau Island, Hauraki Gulf, and the adjacent mainland east coast from the Whangarei district south to Kaukapakapa and Riverhead, and the southern Waitakere Ranges. Birds have also been recorded further north from the Bay of Islands. Sightings of single birds from elsewhere in the North Island (Cape Maria van Diemen, Waikato, Gisborne) and from the South Island (Westland, Otago) are regarded as vagrants, either from Northland or Australia. Kookaburras inhabit open wooded country and forest margins.

Scarce, with a restricted geographic range and a probable total population of under 500. The New Zealand population is thought to be stable.

The New Zealand population is too small and restricted to cause widespread ecological impacts, but kookaburras may have significant local impacts on small native passerines and particularly threatened geckos.

Kookaburras are monogamous and mate for life. Breeding is cooperative with non-breeding family members helping in incubation, brooding, and feeding of young. In Australia this helping phase may last for up to four years. Kookaburras use nest holes which are often reused over many years. A clutch of 2-3 white eggs is laid between November and May. Larger clutch sizes in Australia are attributed to laying by female helpers. No information is yet available on breeding behaviour or success in New Zealand.

Kookaburras live in family groups and keep in visual and audible contact during the day, roosting together at night in a tall tree. They are strongly territorial. Kookaburras are “perch-and-pounce” predators. They sit on a prominent perch when foraging, often for long periods, until prey appears below when the bird pounces on it. It returns to its perch, where it often stuns the prey repeatedly until it is immobilised, when it is swallowed whole. Kookaburras are long lived, with individuals surviving for at least 12 years in the wild.

In Australia snakes and reptiles form about one third of a kookaburra’s diet, and the absence of snakes in New Zealand may well be a limiting factor in the expansion of this species. Its diet includes earthworms, snails, insects, freshwater crayfish, frogs, lizards, rats, mice, and small birds.

A giant kingfisher with a big head, long robust pointed bill, relatively small body and tail. It has a pale head with dark brown ear-coverts, off-white underparts, brown back, and black-barred rufous tail, with blue on the rump and upper wing-coverts.

Calls from a group of birds (frogs in background)